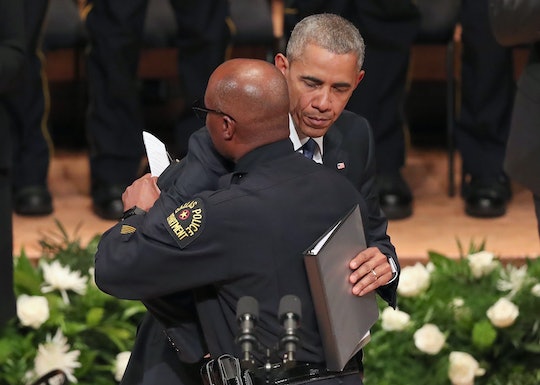 President Obama's Dallas Memorial Address Was Important For This One Reason

I'm just going to say it: You can think whatever you want to want to about our president, but Obama's Dallas memorial address was spot on and important in so many ways. Following Dallas police chief David Brown's address, which ended with a lovely recitation of Stevie Wonder's "As," Obama got right to the heart of the issues that have taken so many lives, whether they are black, white, or police in "blue." What was so on point about his address was that the president was able to honor, and connect, most importantly, law enforcement's struggle with the plight of Black Lives Matter.

Obama, like he often does, made it about the America he "knows," as he put it. That's the America I think most people know, an America where Black Lives Matter protestors and Dallas police walked the same streets on Thursday night, peacefully, until a lone shooter went on a rampage, exposing "the deepest fault lines of our democracy," as Obama said.

But Obama doesn't mince words and he wasn't just paying lip service to anyone. Not to the Dallas police department and not just to Black Lives Matter, as some people who can't see past their own hate didn't seem to grasp on Tuesday afternoon. Obama put both groups' actions in context in his address, acknowledging that this racial crisis, this violence, is about something bigger than memes and tweets and tributes. He talked about guns and race and uniforms versus citizens, without politicizing anything.

"We know those things to be true, they've been true for a long time. You know it. Police you know it, protestors, you know it," he said. "You know how dangerous some of these communities these police serve are. And you pretend as if there's no context? These things we know to be true."

Obama was able to rise above and look down at the situation and put it very clearly:

We flood communities with so many guns that it is easier for a teenager to buy a Glock than to get his hands on a computer or even a book. And then we tell the police, you're a social worker, you're the parent, you're the teacher, you're the drug counselor. We tell them to keep those neighborhoods in check at all costs. And to do so without causing any political blowback or inconvenience. "Don't make a mistake that might disturb our own peace of mind." And then we feign surprise when periodically the tensions boil over.

Then he got pretty freaking real, asking America, all of us, to be honest with ourselves. He said, "but America, we know that bias remains. We know it. ... we have all seen this bigotry in our lives at some point, we've heard it, at times in our own homes, if we're honest, we've heard it in our own heads."

Even on his way out of the White House, Obama asked America on Tuesday to put their "side" away. His address at the Dallas memorial reminded me of a beleaguered parent who has seen a teenager through depression and drug addiction and dropped them off at college, hoping for the best. The problems are latent and real and scary. The opportunity for change is tremendous. If America can remain honest, rise above rhetoric, and lower themselves into that very chilly pool of real dialogue, maybe change can happen.

Obama admitting that bigotry — in all directions — can occur even in his own head is a big deal. It's why black Americans are scared to drive a car just over the speed limit. It's why cops are scared patrolling public housing. It's why people discriminate when it comes to employment and mortgage loans and bathroom usage and fight over the semantics of "black lives" versus "all lives" matter and no one on either side can get the other to see the difference. It's why everyone's backs seem to be up, all the time. All Americans seem to be — even in our most peaceful, hope-loving, hamburger and beer drinking hearts — scared of each other. The bigotry is so normal, it's almost mundane. Until you think about the people that are dead because of it and their families.

This normalcy, this bigotry, is an idea that's hard to talk about, because when we do, we admit our own faults and ignorance of "the Other's" experience, even broaching the subject. Americans should be thankful that our current president isn't scared to do that.

What Obama said on Tuesday is not something that can be easily addressed over dinner and drinks in "polite company." The president today sort of admitted, what at least I, for one, secretly thought while watching cable news the past week, that what happened in Dallas was bound to happen, given the socio-political climate right now. The shooting in Orlando was bound to happen. The shooting at a Baltimore vigil for a teen gunned down in the street on Monday was bound to happen. Of course, it's scary and rage-inducing every time it happens. It shouldn't be that way, but it keeps happening. Americans can count each tragedy in Obama's grey hairs, with each speech, with each memorial, he becomes more stern and more hopeful all at the same time. That's something to admire, I think.

Until American politicians and communities can talk, openly and honestly, about what happens on American streets every day — and not just violence, but the little acts, the little things that build up and "boil over," in our heads and homes and walking around just doing our thing at Target — there's no way to move forward.

President Obama's address to Dallas was just that — open and honest and very, very real. Just as real as former George W. Bush's instinct to dance a little to "Hallelujah" at the end of the ceremony, I think. I like that our goofy, former president felt moved to sway and sing along to a choir after Obama's address.

Because that is the most authentic thing — feeling some love at a tragic memorial, front and center, and rolling with it. America is so big and so varied and everyone's experience is so different, but when people start to get honest and tackle the big questions and try to see things from the other side, change happens. I don't go to church, but, screw it, hallelujah.

Bias and racism and violence in America are real. So are good intentions, whether it's walking onto a highway in Baton Rouge or putting on a uniform to protect people who walk onto highways in Baton Rouge. Those good intentions don't always, in that cliché way, have to lead to hell. Americans should be humbled and embarrassed after last week's bout of violence. Americans should think about every bullet and every person affected by those bullets and think about where they came from and why. But something has to give.

As an American, I feel proud that our beleaguered president had the courage and insight to make it about the bigger picture. Americans should think long and hard about they want. And then demand it because this is an election year and it doesn't have to always be like this, right now.