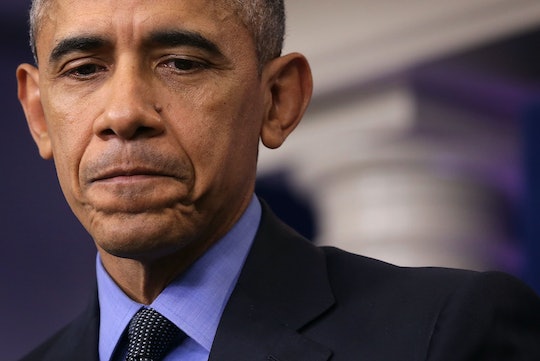 President Obama's Executive Action On Guns Is Imminent, But Many Wonder Why It’s Taking Him So Long

A loophole in regulations surrounding gun sales could soon be closing. President Barack Obama could issue an executive order on firearms sales as soon as mid-January, CNN reported Thursday. In a move described by sources as “imminent,” the White House confirmed to CNN that the president is expected to take unilateral action in the form of a new executive order requiring more people “in the business of selling” guns and other weapons to perform background checks before making sales.

Applauded as long-overdue by gun control advocates, the plans come on the heels of a number of horrific mass shootings, including recent incidents in Roseberg, Oregon; San Bernadino, California; and Charleston, South Carolina that left many people dead.

Federal law already requires federally-licensed gun retailers to conduct FBI background checks, but the law is silent on whether that mandate extends to people without federal licenses or anyone selling from a personal collection. The new rule would cover those gun sales — people selling without licenses or from a collection — as well as individuals selling at gun shows or out of their homes. Those transactions from non-retailers make up as much as 40 percent of all gun transfers, according to a Harvard study.

Though plans for the executive order are still underway, according to CNN, a White House spokesperson said the new action is meant to fulfill Obama’s earlier promise to take action to curb gun violence.

Speaking to members of the press following the massacre at Umpqua Community College in Roseberg, Oregon this fall, Obama said curbing gun violence was critical and urged news outlets to put US mass shooting statistics into perspective, according to Politifact:

We spend over a trillion dollars, and pass countless laws, and devote entire agencies to preventing terrorist attacks on our soil, and rightfully so. And yet, we have a Congress that explicitly blocks us from even collecting data on how we could potentially reduce gun deaths. How can that be?

In fact, examining gun violence statistics for the past decade underscores the need for legislative action. According to Politifact, while some 71 Americans have been killed by extremist attacks on US soil between 2005 and 2015, a staggering 301,797 Americans were killed by guns.

Given those statistics and the rising number of mass shootings, it’s not surprising that some advocates have criticized the White House for moving too slowly to address gun regulations. Speaking to NBC News in October, one advocate tapped to help the Obama administration shape its plan said that several groups were concerned Obama had spent too much time fretting over political considerations. “I think there was a lot of pressure on the White House to let this go for a while,” he said. “Now, in his last 16 months, he can do this.”

Others have expressed concerns that the order doesn’t go far enough to address legal loopholes. CNN reported that advocacy group Everytown for Gun Safety delivered recommendations to White House policy advisors including a proposed test for assessing whether a gun retailer could obtain a federal license. The group, founded by media mogul Michael Bloomberg, also recommended defining “personal collection” as a firearm that has been in an owner’s possession for at least a year.

White House spokesman Eric Schultz told CNN the plan was “complicated” and took time for policy advisors to work through.

Whether the president will announce his plan on January 17 during his State of The Union Address or later in the month remains to be seen, but either way, the Administration will face a battle from Republicans in Congress and on the campaign trail. Those in favor of fewer gun restrictions will likely challenge the substance of Obama’s plan as well as his chosen tactic. Gun rights groups have framed past attempts at regulation as a first step toward banning or confiscating firearms outright.

The current proposal could be painted as another step towards dismantling the Second Amendment, and a fresh example for those who believe Obama has a history of side-stepping Congress. Obama’s history of taking unilateral presidential action —either in the form of executive orders or presidential memoranda — has in the past led his opponents to question whether he violated the constitution by achieving policy goals without congressional approval.

So far, members of the House and Senate have yet to deliver a comprehensive plan to curb access to firearms. And gun lobbyist continue to balk at any hint of stiffening regulation. It may be that at this point an executive order from the White House — however slow-moving or slender — could be the only real movement in the national debate over gun control.