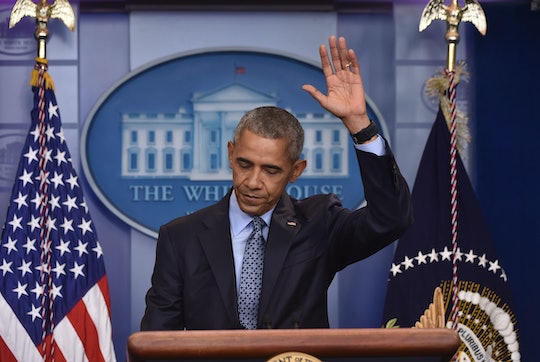 On his last day in office, President Barack Obama shared a letter of hope and gratitude with the American people, who he has served for the last eight years as commander in chief. After eight long, at times tumultuous, but at times truly remarkable, years President Obama's final goodbye proves love was always his theme. He always gives the American people all the credit for the successes during his presidency.

Obama's letter to the American people, posted to Facebook on Thursday, comes after his formal farewell address, which he imparted to the nation last week. Speaking from Chicago, Obama reminded the American people that "change only happens when ordinary people get involved and they get engaged, and they come together to demand it." Change has been a major theme of Obama's since his days on the campaign trail, though he could not have foreseen the greater impact his message would have as he left office. As he ran through the laundry list of promises he kept throughout his tenure as president, he remained humble and urged the American people to remain aware of what is left yet to be done:

It's up to all of us to make sure our government can help us meet the many challenges we still face. We have what we need to do so. We have everything we need to meet those challenges.

On Thursday, his last day in office, Obama's final call to action to the American people came in the form of a letter. He noted that it's tradition for the exiting president to write a letter to the incoming president, which he plans to do, but he also wanted to communicate one last time to the nation he has led, and sharing his gratitude, praising us collectively for our successes during his presidency, according to the post on Facebook:

I've taken heart from the hope of young graduates and our newest military officers. I've seen our scientists help a paralyzed man regain his sense of touch, and wounded warriors once given up for dead walk again. I've seen Americans whose lives have been saved because they finally have access to medical care, and families whose lives have been changed because their marriages are recognized as equal to our own. I've seen the youngest of children remind us through their actions and through their generosity of our obligations to care for refugees, or work for peace, and, above all, to look out for each other. I've seen you, the American people, in all your decency, determination, good humor, and kindness. And in your daily acts of citizenship, I've seen our future unfolding.

His message of hope comes on the eve of a day that many Americans have dreaded, even feared: the inauguration of a man as president who has the lowest approval ratings of any incoming president in the last 40 years. A man who has demonstrated, at times, intractable immaturity, blatant bigotry, and an alternately perplexing and alarming lack of understanding about the gravity of the role he is on the precipice of undertaking.

While Obama has vowed, since the election, to ensure a smooth transition of power, there are a lot of Americans who wonder how it must feel for Obama to be leaving the White House to a man who has relentlessly accused him of not being an American citizen, has a fairly well-recorded history of overt racial prejudice, and apparently thinks the presidency is a weekday, 9-to-5 job.

If Obama's final word to the American people is any indication, while he is no doubt aware of the challenges to come under a Trump presidency (bolstered by a Republican Congress) he remains ever hopeful that we the people will collectively rise up and be empowered by what's been his message all along: that together "Yes We Can" affect change:

When the arc of progress seems slow, remember: America is not the project of any one person. The single most powerful word in our democracy is the word 'We.' 'We the People.' 'We shall overcome.'

We don't know yet what presidential wisdom Obama intends to impart in his letter to Donald Trump (or even if the president-to-be would heed it anyway), but his final letter to the American people will hopefully not be the last we hear of his words of reassurance. In his new post-presidential life, Obama intends to spend time with his family and work on his memoir. And, for those of us who really just can't stand to see him go, he also noted at the end of his final note to the nation that we can "keep in touch" via his new, official website: The Obama Foundation.