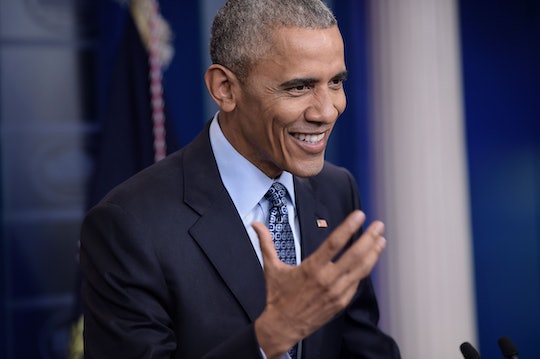 The day of President-elect Donald Trump's inauguration has arrived, and while the nation is still sharply divided over its feelings about a Trump presidency, President Obama has made sure to leave reassuring words of wisdom on social media for anyone watching Trump's swearing in with concern and trepidation. President's Obama's last tweets from the POTUS Twitter handle are as meaningful as you'd expect them to be, and echo his parting message of unity, optimism, and a continued belief in the strength of the nation.

In addition to his public addresses, Obama has been using his official @POTUS Twitter handle to share messages with Americans since it was created for him in May 2015, according to The Hollywood Reporter, and unsurprisingly, his tweets have been incredibly popular. His first-ever tweet in 2015, where he joked about finally being allowed to get his own Twitter account, was retweeted almost 300,000 times, while his tweet following the SCOTUS ruling on the legalization of marriage equality in June 2015, along with his Jan. 10 tweet tied to his farewell address were even more popular (with the latter being retweeted about 526,000 times in roughly 13 hours). But even after delivering his final speech to the nation, Obama has continued to connect with Americans on Twitter, and honestly, his words are pretty much exactly what many people need to hear.

Even though, by the end of the day, Trump will have officially been sworn in as the country's 45th POTUS, Obama sent out a number of tweets from his official account Friday morning. And in doing so, he repeated the message of gratitude that he shared not only during his farewell address in Chicago on Jan. 10, but also in a moving final letter to the American people, which he released Thursday, according to The Independent.

In it, Obama noted that while it's "a long-standing tradition" for the sitting POTUS to leave a letter in the Oval Office for his successor, he first wanted to leave a message for the rest of the country, and thanked Americans for allowing him "the honor of serving as your 44th [president]." He also wrote — and then tweeted — about how much the experience changed him, writing, "You made me a better President, and you made me a better man."

But as he emphasized in his farewell address, where he told the crowd that he would continue to "be right there with you, as a citizen, for all my days that remain," according to The Los Angeles Times, Obama tweeted Friday that he would stand with Americans in solidarity going ahead, even though he would no longer be their leader.

He also asked Americans to "reflect what matters most to you," looking forward, and shared a link the website for The Obama Foundation, where he and his wife, Michelle, shared a video message about their next steps. Though the first lady did note that they intend to "take a little break," immediately following their exit from public service, the Obamas discussed their plan to take on projects all over the country — and the world — through their newly-created "startup for citizenship," which will be located on Chicago's South Side, according to The Hill.

The President explained the mission of the foundation, and reached out to the public for their ideas and feedback:

More than a library or museum, it will be a living, working center for citizenship. That's why we want to hear from you. Tell us what you want this project to be, and tell us what's on your mind.

The first lady also encouraged Americans to come forward to let them know what they wanted the outgoing presidential couple to focus on moving forward:

Send us your ideas, your hopes, your beliefs about what we can achieve together. Tell us about the young leaders and companies and organizations that inspire you. This will be your presidential center just as much as it is ours. So we want you to tell us what we should be thinking about.

Then, in his final tweet as POTUS, Obama repeated his message of change one last time, reiterating the value not of his own ability or leadership, but in the ongoing ability of the American public to fight for what's right.

Given that Obama has been the first sitting president to have his own Twitter account, what will happen to the account itself once Trump — himself a famously prolific Twitter user — is sworn in? According to TIME, Trump will inherit the @POTUS handle, along with a clean slate:

When Trump is inaugurated, the @POTUS Twitter account will be handed over to him with its nearly 12 million followers, but without any tweets on its timeline. All of Obama’s tweets will be preserved in the National Archives and Records Administration.

As for Obama's Twitter future? TIME noted that all of his current @POTUS tweets will be transferred to a new account, @POTUS44, and he also will continue to have access to his @BarackObama account, which is currently run by his political team.

It's unclear though, whether Trump will actually use the @POTUS Twitter account. That's because, according to CNBC, he still intends to continue to tweet from his @realdonaldtrump Twitter account (arguably his favorite vehicle for communicating with the public), where he currently has over 20 million followers.

For now, President Obama's final messages on Twitter to the American people have served as something of a salve to help heal any lingering wounds still felt by those disappointed in his departure.