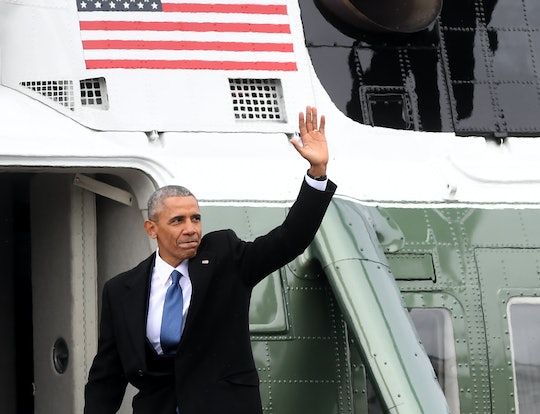 Even though he and his family have departed from D.C. en route to a well-deserved and long-awaited vacation, our 44th president, Barack Obama, had time to return to his old Twitter profile and get it updated. The handle @BarackObama has been returned to him, now that President Trump is handling @POTUS — on Twitter, at least — and President Obama's new Twitter bio is just too perfect.

Obama and his family left D.C. Friday afternoon after the inaugural ceremony to head to Palm Springs for a family vacation — pretty much the first one they've had in at least eight years. As private citizens, anyway. While the Obamas will have secret service protection for the rest of their lives, and plenty of other benefits granted to former first families, this vacation will be their first time together out of the political spotlight. After a particularly stressful end to 2016, it probably couldn't have come at a better time.

Since he's traveling, though, Obama did what most of us do when we're waiting in the airport and he hopped on Twitter. There's a plethora of content related to President Trump's various inauguration day activities, and the expected hot takes and memes abound. Since he's no longer handling the @POTUS handle, Obama's first order of business was to get back to his old handle, @BarackObama. After eight years it's impressive that he remembered his password.

Of course the first thing he did was update his Twitter bio to include just four words to describe himself to his old, and new, 81 million followers: "Dad, husband, President, and citizen." He checked out his Twitter feed, retweeting some good stuff from The Obama Foundation, and writing some tweets of encouragement:

He provided a link for folks to share their thoughts with him, through the foundation set up for the Obamas to continue their public service work post-presidential life. His words of hope and outreach came amid chaos on the streets of D.C. as President Trump's motorcade paraded toward the White House. Trump supporters lined the streets, but so too did protesters. Some threw bricks, lit cars on fire, chanting "Not my president," as law enforcement sprayed pepper spray and concussion grenades meant to reign those protesters in. Many on both sides have been injured, and nearly 100 protestors have been arrested.

Obama's call to action, his reassuring words, and his relaxed profile picture all combined to create a moment of calm, and deep appreciation, amid the storm that's still yet to come. As the new administration moves ahead, many will continue to find solace in Obama's continued Twitter presence. He may not be the current president, but for many, he will always be their president.