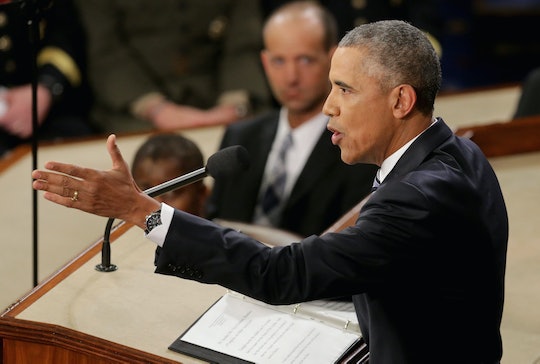 President Barack Obama proved why he's the capital-B Boss when he delivered a State of the Union quote about Osama bin Laden that basically had everyone going "aww, snap!" The moment underlined his serious point about what he is doing to combat ISIS, but rather than just recite his strategy, he really got the country's attention by mentioning how he helped bring down bin Laden. The only disappointing thing is that Obama didn't save the quote for last because it would have been a perfect mic drop moment.

Addressing the concerns about how he's handled the threat from the Islamic State, Obama said:

If this Congress is serious about winning this war, and wants to send a message to our troops and the world, you should finally authorize the use of military force against ISIL. Take a vote. But the American people should know that with or without Congressional action, ISIL will learn the same lessons as terrorists before them.

In case that didn't get the message across, he added:

If you doubt America’s commitment — or mine — to see that justice is done, ask Osama bin Laden.

The moment got crazy applause from the audience (although, predictably, not from Republicans) and the equivalent of applause on social media. (Bin Laden was assassinated on Obama's watch.)

Whatever you think about the Obama presidency, who among us isn't going to miss that kind of swagger at the next State of the Union? Certainly makes it exciting!