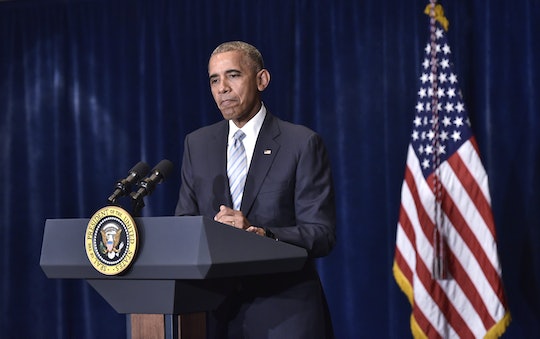 Less than 24 hours ago, President Obama took to the podium in Warsaw, Poland, to speak publicly on the murders of Alton Sterling and Philando Castile. And just as soon as he'd left the stage, he was back on it. President Obama's reaction to the Dallas shooting, which claimed the lives of five police officers in Dallas, Texas, is just the latest in a slurry of shootings and murders that have taken our country by storm this summer. And the resignation, fury, frustration, exhaustion we've all become far too familiar with were evident on every inch of our president's face.

Speaking once again from Warsaw, Poland, where President Obama is attending the NATO Summit, Obama called the Dallas shooting a "viscous, calculated despicable act," adding that the "senseless murders" and slaughter of five police officers by suspects using sniper rifles was a "tremendous tragedy" for our nation. After taking the podium for the second time that evening to address a situation taking place in the United States, Obama said:

I spoke this morning with Mayor Rawlings of Dallas to convey the deepest condolences of the American people. I told him that the federal government will provide whatever assistance Dallas may need as it deals with this tremendous tragedy.

He then added a sentence that Americans, in the immediate aftermath of senseless violence and killings, have become all too familiar with hearing: "We still don't know all the facts."

Every day more and more men and women are killed as a result of racism, terrorism, and discrimination — all because of who they are and what they are in the eyes of other people — yet we often don't have a rhyme or a reason for why these things happen.

In a transcript of President Obama's speech on the Dallas shootings obtained by Fox News, the president continued:

What we do know is that there has been a vicious, calculated and despicable attack on law enforcement. Police in Dallas were on duty doing their jobs keeping people safe during peaceful protests. These law enforcement officers were targeted and nearly a dozen officers were shot. Five were killed, other officers and at least one civilian were wounded; some are in serious condition. We are praying for their recovery.

As I told Mayor Rawlings, I believe I speak for every single American when I say we are horrified over these events and we stand united with the people and the police department in Dallas.

According to police, there are multiple suspects. We will learn more undoubtedly about their twisted motivations.

Let's be clear: There is no possible justification for these kinds of attacks or any violence against law enforcement.

The FBI is already in touch with the Dallas police and anyone involved in these senseless murders will be held fully accountable. Justice will be done.

I will have more to say about this as the facts become more clear. For now, let me just say that even as yesterday I spoke about our need to be concerned as all Americans about racial disparities in our criminal justice system, I also said our police have an extraordinarily difficult job.

The vast majority of them do their job in outstanding fashion. I also indicated the degree to which we need to be supportive of those officers who do their job each and every day, protecting us and protecting our communities. Today is a wrenching reminder of the sacrifices they make for us.

We also know when people are armed with powerful weapons, unfortunately, it makes attacks like these more deadly and more tragic.

In the days ahead, we will have to consider those realities as well.

In the meantime, today, our focus is on the victims and their families. They are heartbroken. The entire city of Dallas is grieving. Police across America, it is a tight-knit family, feels this loss to their core and we are grieving with them.

I ask all Americans to say a prayer for these officers and their families. Keep them in your thoughts. As a nation, let's remember to express our profound gratitude to our men and women in blue, not just today, but every day.