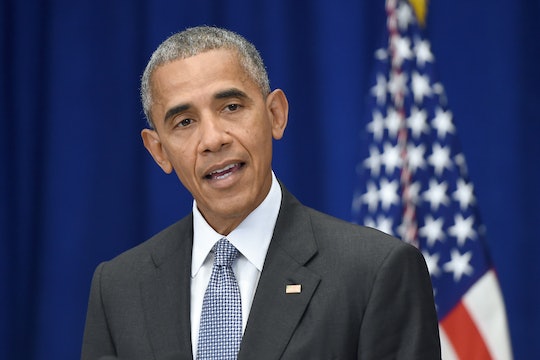 President Obama's Thoughts On Sexism & The Presidency Are Seriously On Point

Many in the political community are flummoxed by the current presidential election, in which a man previously best known for sticking his name on tall buildings stands a very real chance of beating a woman whom the current president refers to as the most qualified candidate ever. But on Sunday, President Barack Obama suggested that sexism could be causing Hillary Clinton's trouble in the polls, leading women across the land to say, "Yes, thank you!" (And also, "Duh.")

President Obama has been an outspoken advocate for Clinton (and a very strong condemner of Republican nominee Donald Trump), and at a DNC fundraiser in New York, he told the room,

There's a reason why we haven't had a woman president; that we as a society still grapple with what it means to see powerful women. And it still troubles us in a lot of ways, unfairly, and that expresses itself in all sorts of ways.

Yes, Clinton has some issues as a candidate (some of which have been portrayed fairly in the media, some of which have not). But rarely has a candidate received so much ire for, well, acting like a politician. Clinton does not tell the truth all the time, but Pulitzer Prize-winning fact-checker Politifact rated her one of the most honest politicians out there, while Trump is by far the least honest. So when the average American feels that Clinton is less trustworthy than Trump, something else is going on, and President Obama did a great job of calling it out.

There are seemingly endless psychological studies demonstrating that the more women succeed, the more men feel threatened by them. And women doing well in the workplace receive far more criticism in performance reviews than their male counterparts (with said reviews featuring the word "abrasive" far more), even when the reviews are being given by other women.

When Clinton was Secretary of State, a situation in which she was doing good work but still reporting to a man, she enjoyed high favorability ratings (and viral celebrity as a texting badass!) But as soon as she began running in earnest to be the boss herself, those favorability ratings plummeted.

We as a society have never seen someone like Clinton before, and for everyone cheering the progress, there are some who, maybe without even consciously knowing it, feel a resistance to the unfamiliar. The thing about internalizing societal sexism since birth is that you don't realize you're doing it, and so it expresses itself, as Obama said, in "all sorts of ways."

But here's hoping that the more we call it out, the more we can begin to recognize it and correct for it. So thanks Obama (meant sincerely!) for adding another voice to the chorus.