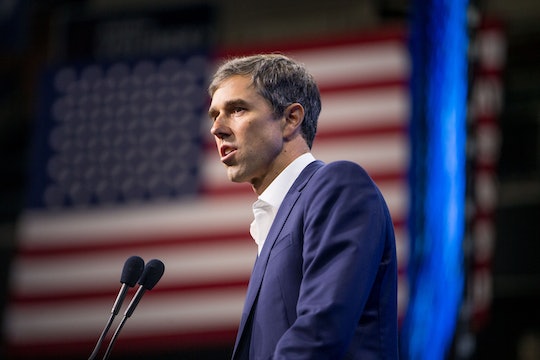 People expect to see presidential hopefuls at odds with each other on the campaign trail, but at the Democratic debate on Thursday night, there was a surprising show of unity. During the debate on Sept. 12, the presidential candidates praised Beto O'Rourke for his response to the El Paso, Texas mass shooting last month, as well as his stance on gun violence prevention measures and laws.

In early August, 22 people were killed after a gunman opened fire in an El Paso, Texas, Walmart, according CBS News. The shooter obtained the weapon legally. O'Rourke, who grew up in El Paso, was quick to respond to the horrific crime that was committed in his hometown. "I ask for everyone's strength," he said at the time, according to CBS News. "Everyone's resolved to make sure this doesn't continue to happen in this country." And during an appearance on NBC's Meet The Press later in the month, O'Rourke called for a ban for all assault weapons except "on the battlefield or engaged with an enemy," according to Politico.

On Thursday night, O'Rourke's fellow presidential hopefuls took the time to praise him on his response to this horrific shooting. "The way he handled what happened in his hometown is meaningful," former Vice President Joe Biden said.

"I want to commend Beto for how well he has spoken to the passion and frustration and sadness after what has happened in his hometown in El Paso," Julián Castro added.

Following the senseless act of violence, O'Rourke told reporters that the shooting in his hometown gave him a "new kind of mission" with his campaign and his platform, according to The Atlantic. "At a really deep, fundamental level [the shooting] made me wonder what I'm doing and what I'd ever be doing, or what we were doing," he said. "And this is probably not making sense, but — how could this happen? How could I allow this to happen, as a part of this country, as someone who held public office, as an El Paso-an?"

In the weeks since the El Paso shooting, O'Rourke has attended a funeral for a victim of the shooting, according to the El Paso Times, and has been more vocal about his stance on having stricter gun laws. Beto's plan for gun safety involves creating a nationwide gun registry, requiring universal background checks to purchase guns, and banning assault weapons, for example. In an Op-Ed penned for USA Today, O'Rourke wrote that he would also institute a mandatory buyback for assault weapons if elected president.

While he praised Walmart for stepping back from selling ammunition in the wake of the shooting, he said that more needed to be done, according to CNBC. "This is a step in the right direction — and I'm grateful Wal-Mart has taken action — but we can't rely on corporations to stop gun violence," he said in a statement at the time. "We need universal background checks, we need red flag laws, and we need to buy back every single assault weapon."

O'Rourke's approach to gun safety, as he detailed at the deate, also received praise on Twitter.

In an email to voters on Thursday, O'Rourke also called on banks and credit card companies to address gun violence by refusing to provide services for firearm sales, according to The New York Times. "Everyone has responsibility to do their part," he wrote.

It's hard not to see the good in O'Rourke's stance on gun safety measures. And the fact that the other presidential hopefuls on stage praised him for his response in the wake of a mass shooting speaks volumes.