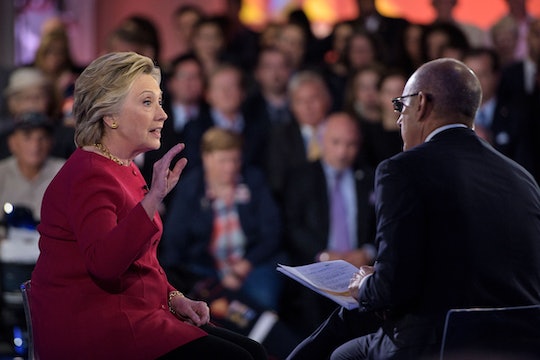 Wednesday night's Presidential Forum, hosted by NBC News, sparked some interesting discussions on Twitter. Both candidates, former Secretary of State Hillary Clinton and businessman Donald Trump, made comments (or did not comment) on issues that had the internet up in arms for most of the evening. Host Matt Lauer didn't get such rave reviews, either. But one Twitter hashtag in particular, started by Ella Dawson, is part of a larger, ongoing response to comments from Reince Priebus, chairperson of the Republication National Committee. Priebus said that Clinton didn't smile enough during the forum. Ella Dawson, an activist and writer from Brooklyn, started a hashtag to call out Priebus: here's how #PresidentialFace tweets highlight Reince Priebus's sexist double standard. Priebus's office didn't immediately respond to Romper's request for comment.

Dawson, who started the hashtag Wednesday night in response to the exchange, is very much "with her" — just this week Dawson received a letter from Clinton thanking her for the work she has done to advocate against the stigma surrounding Sexually Transmitted Diseases: work that has left Dawson vulnerable to not just internet trolling, but out-and-out online abuse. When she posted a piece on Medium talking about her experience with the "alt-right" and praising Clinton's commitment to fight back against them, Clinton's team read the piece, forwarded it on to her, and the Secretary of State responded to Dawson personally.

"I thought it was ridiculous that Hillary was being criticized for not smiling enough during a serious discussion about our country's safety and the lives of our troops," Dawson told Romper via Twitter, "I don't want a President who grins and jokes her way through our national security, I want someone with forceful, mature resolve. I took a selfie and started the hashtag because every woman I know has been told to smile more, and the fact that a woman is running for the highest office in this country and is still getting the same sexist bullshit is maddening."

Clinton was, naturally, the first person to respond to Priebus's tweet stating that she "was angry and defensive the entire time." Or, at least, her very much on-the-ball social media squad responded:

Tweets in response to Dawson's began pouring in almost immediately:

It didn't take long for the hashtag to catch on, because women have only been sick of being told to smile more for, like, centuries. In addition to sharing their selfies, those who responded to the hashtag also had a lot of inspiring things to say. No surprise that just a couple of hours later, #PresidentialFace was trending.

The hashtag doesn't seem to be slowing down anytime soon, and women definitely aren't planning on smiling for Priebus.