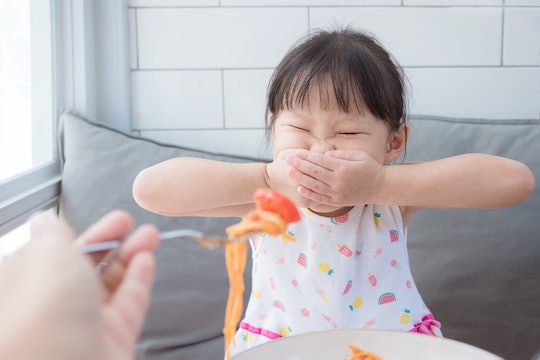 If Your Kid Is A Picky Eater, Research Says Pressuring Them To Try New Foods Isn't Helping

The dinner table (or, really, any table) battle is one most parents are familiar with. Sit a kid down to eat and they'll inevitably hate something that's on their plate, but is arguing with them truly worth it? Well, a new study found that pressuring your kids to try new foods most likely won't stop them from being a picky eater.

The study, conducted by researchers from the University of Michigan, was recently published in the journal Appetite. Researchers set out to answer some key questions surrounding children's eating habits, namely looking at the consequences for kids' weight and picky eating.

It's not uncommon to see parents at their wits' end, arguing with a toddler who is adamant about not eating the new offending item of the week. And, often, people sheepishly apologize for their kids' picky eating habits — but is it really something to be ashamed of? According to the new study, insisting that kids eat foods they don't like isn't actually linked to any behavioral changes. In fact, according to the researchers' findings, pressuring kids to eat food they don't like and picky eating go hand-in-hand.

Researchers also found that picky eating didn't impact the child's weight in any way. “In a nutshell, we found that over a year of life in toddlerhood, weight remained stable on the growth chart whether they were picky eaters or not,” Julie Lumeng, director of the U-M Center for Human Growth and Development and a physician at C.S. Mott Children’s Hospital, explained in a press release for the study.

Lumeng went on to note that pressuring children did nothing to help the situation. According to the same press release, she said, “Then we asked if pressuring led to a decrease in picky eating, and it didn’t. There was no link between pressuring and picky eating and any of these other outcomes.”

Many parents get frustrated when kids refuse to eat certain foods, often turning dinner into a chore. It's the whole "eat your peas or sit at the dinner table until bed" deal, but imagine being put into that position yourself. For a child, learning agency over their bodies is incredibly important, as if learning how to make choices.

Giving kids a say in what happens "builds respect, strengthens community, invites cooperation, develops problem-solving skills," and is a healthy way to interact with a normal human need for some level of power and control, as outlined by Psychology Today. That's not to say parents have to let their kids only eat a bunch of sugar and junk food. Instead, Psychology Today suggests, for example, giving kids choices without overwhelming them.

"One night at dinner, my mom served both of my sisters peas, but she served me carrots. She said to me, with such loving kindness, ‘I’m serving you carrots because you don’t like peas.’ I felt very loved and respected, and I will always remember that she said that,” Lumeng shared in the study's press release.

That anecdote helps highlight some of the ways parents can approach eating that isn't going to frustrate both parties involved.

Researchers found that, more than anything, pressuring picky eaters damaged the child-parent relationship and it makes sense. They also noted how we are taught to treat children, forgetting that taste is somewhat hard wired and beyond our control at any age. Forcing kids to eat food they've expressed dislike for isn't going to change that dislike.

Instead, as recommended by About Kids Health, parents can try involving kids in mealtime tasks, including picking out what food they're going to eat, is a great way for parents to rebuild and strengthen that relationship. "Involving your child in weekly food and menu tasks is a way to get them interested in healthy food," About Kids Health explained. "Children tend to eat better when they have a say, no matter how small, in family meals."

Kids might still be picky eaters, but hey, we all have our preferences. And at least this way, mealtime can go back to being enjoyable instead of one long, constant battle.