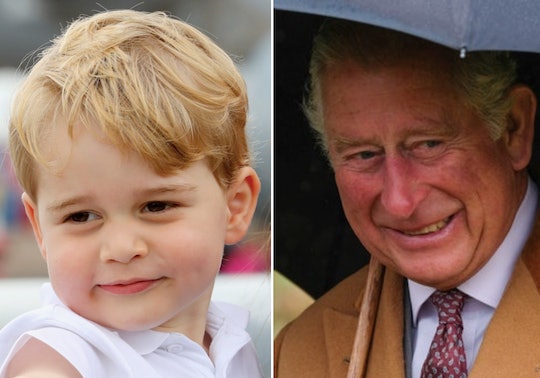 When you're choosing a baby gift for the future King of England, sending some receiving blankets and an electric bottle warmer probably isn't going to cut it. Luckily for Prince Charles — who is also heir to the throne himself — he had a little something different up his sleeve for his first grandchild. A recent royal documentary has revealed Prince Charles' gift to Prince George in honor of his birth more than five years ago, and though Queen Elizabeth II's first-born may not usually appear to be hugely sentimental, his special gesture definitely suggests otherwise.

In the upcoming special, Prince, Son and Heir: Charles at 70, Prince Charles showed off the arboretum at his home in Scotland, according to People, and explained that he actually planted the trees when Prince George was born, so that his grandson could watch them grow along with him.

Given that Prince Charles has long been an ardent environmentalist championing conservation and sustainability, it's not surprising that he might decide to give an eco-friendly gift. But much more than simply being a way to make a statement, Prince Charles' decision to plant trees for Prince George is also a really beautiful reflection of the love he has for his grandson, and his desire to leave him a meaningful gift that the young prince may even be able to show his own grandchildren one day.

In the BBC documentary, set to air in the United Kingdom in November, according to The Express, the Prince of Wales showed off the "dozens of different varieties of trees" planted at Birkhall, his royal estate located next to Balmoral Castle, the Queen's summer residence. And though the rather reserved royal usually remains mum on personal topics, this time, he seemed more than happy to open up, explaining that the area was "George's wood."

The prince also shared that it was a particularly meaningful gesture for him to pass on, and said, according to The Express, "As I get older, all I really long for is to plant trees. I hope it will be quite amusing for George as they grow up and he grows up."

Although it's not yet clear if Prince George has had the chance to spend much time among the trees planted in his name, Prince Charles' wife, Camilla, Duchess of Cornwall, certainly seemed proud of her husband's efforts. According to People, she said, "You can’t believe how much it’s grown. It was tiny when it was all planted. The next thing you know, you’re being dwarfed by it."

Unfortunately for Prince Charles though, the Scottish weather hasn't always worked out in his favor when it comes to ensuring George's trees are adequately hydrated. According to People, Camilla quipped, “He does rain dances most of the day to try and get some more [water]."

Prince George might still be a bit young to understand how special it is that Prince Charles works so hard to care for the trees planted on his behalf at Birkhall, but if Prince Harry is any indication, he'll likely grow to have quite the appreciation for his grandfather's dedication to the environment as a way to make the world a better place. In addition to launching the now 42-year-old charity, the Prince's Trust, which provides young people in Britain with education, training, and jobs, according to The Express, Prince Charles has publicly advocated for eco-friendly policies and environmental sustainability since as far back as the 1960.

In an interview with his father in December 2017 for the BBC, according to the Daily Mail, Prince Harry said that he greatly admires his dad's work, and that these days, the two spend "hours and hours" talking about climate change, and ways to influence positive environmental change, and in his most recent speeches during his royal tour in Australia, New Zealand, Fiji, and Tonga with his wife, Meghan, the Duchess of Sussex, he continued to spread his father's message.

As for Prince Charles? According to People, he told Harry during their chat that his motivation was pretty simple:

What I’ve tried to do all these years is to make sure, if I can possibly, is that ensure that you and your children, my grandchildren, also everybody else’s grandchildren, have a world fit to live in, that provides them with opportunity.

Though Prince Charles is usually thought to subscribe to the old-school royal style of keeping a stiff upper lip (you probably won't see him giving any Meghan Markle-style hugs to well-wishers anytime soon!), in his own way, it's clear he too has a very loving heart, particularly when it comes to his family. And it's meant that Prince George will forever have a special place at Birkhall just for him.