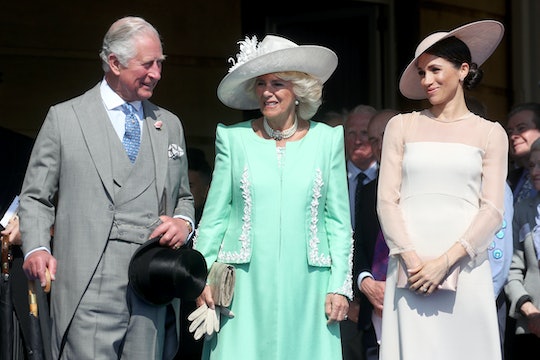 When Meghan Markle and Prince Harry announced that they were expecting their first child together, people understandably got super excited. And that excitement is going to continue until the baby is born sometime next spring. Even Prince Harry's dad, Prince Charles is ecstatic about the news. During a recent appearance, Prince Charles joked about baby names for Prince Harry and Markle and they're kind of brilliant.

If Prince Charles doesn't want to be the future King of the United Kingdom, he should consider a future in comedy. While everyone in the United States was eating turkey and mashed potatoes on Thursday, Prince Charles was in London making some serious jokes, and hinting about the potential baby names of his future grandchild, according to Us Weekly.

While speaking to a group at the Australia House in London on Thursday, Prince Charles told the crowd that he had a chat with Prince Harry recently. "My son Harry tells me that during their recent tour of Australia, he and his wife were offered countless, thoughtful suggestions for naming their forthcoming baby," Prince Charles said, according to Us Weekly.

And he is so right. During their three week long tour to Australia, New Zealand, Fiji, and Tonga, Markle and Prince Harry reportedly received a "long list of names from everyone," according to Harper's Bazaar.

But Prince Charles' baby name suggestions are the best.

Prince Charles stated his own suggestions, according to Us Weekly:

Just between us, just between us. I suspect that Kylie and Shane may possibly make the short list. But, ladies and gentlemen, I would not hold your breath for Edna or Les.

Sure, these names don't seem completely out of the ordinary, and this is what makes Prince Charles' joke so hilarious. When a person in the royal family gets pregnant and gives birth, they can't just name their baby any average or creative name, according to Vogue. Instead, these baby names must be rooted in history, pay respects to royal relatives, and not be completely old fashioned. Because of this, there is typically a "shortlist" of baby names floating around before the baby's birth, according to the BBC — because the name of the baby has to be good, which means it needs approval. After all, this is a baby name that is going to be rooted in history books for years to come.

So, it doesn't exactly look like Prince Shane or Princess Kylie will be in the future of the royal family (although that would be pretty amazing). Especially since people are already placing bets on what Markle and Prince Harry will be naming their future son or daughter, according to Newsweek — and the names Alexander, Alice, and Arthur are reportedly major frontrunners.

But maybe people need to start placing their bets on names like Kylie or Shane. Prince Harry pretty much made history when he married Markle, an American divorcee, according to Reader's Digest. So why wouldn't they want to make history again, by picking a completely original name?

It wouldn't seem far fetched for Markle to want to have some kind of influence when it comes to picking out a name for her daughter — and if that name has an American influence, it will only highlight how historic their marriage really is.

But, at the same time, people shouldn't count on this. The royal family is known for reusing names, according to Cosmopolitan, and it's just as likely that they will re-use a name of one of Prince Harry's ancestors for his child. Although their name might not be "Edna or Les," according to Prince Charles, it's likely that the name will be just as traditional.

But, no one (except those closest to the couple) will know for sure what name they end up picking until Markle gives birth, which should be sometime next spring, according to Harper's Bazaar. And until then, they can enjoy Prince Charles' very funny jokes.

More Like This
You’ve Probably Been Pronouncing “Lilibet” All Wrong
What Exactly Are Minions, Anyway ?
Family Of Grandfather Killed In Highland Park Mass Shooting Say He "Saved" Their Lives
Megan Fox Explains Why She Asked Machine Gun Kelly If He Was Breastfed As A Baby