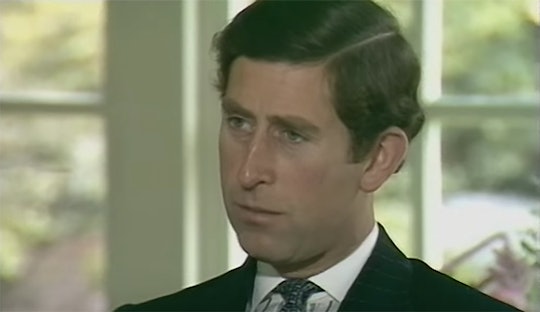 Prince Charles' Quotes About Princess Diana Highlight Their Complex Past

These days, royal fans are mostly concerned about the Cambridges and their three children, as well as the Sussexes and their son, Archie. Which makes sense because they're the royals of this generation. But once upon a time, the focus was on Prince Charles and Princess Diana. And although royal fans may not have realized it at the time, Prince Charles' quotes about Princess Diana highlighted their complex relationship.

As a refresher, Prince Charles and Princess Diana were married in 1981, when Diana was barely 20 and Charles was 32. The royal had reportedly been feeling pressure to settle down with a suitable future queen, and Diana certainly fit the bill. However, the prince was supposedly in love with Camilla Parker Bowles, his current wife. And it wasn't too far into Prince Charles' and Princess Diana's marriage that the prince allegedly started an affair with Camilla, who was also married at the time, according to Good Housekeeping.

Ultimately, Charles and Diana divorced in 1996, when Prince William was 14 and Prince Harry was 11. Three years later, Diana was tragically killed in a car accident in August 1997. Although Prince Charles hasn't publicly spoken about Diana in years, let's take a look at what he's said about the Princess of Wales.

Wait, What Did He Say Before Their Wedding?

A documentary titled Charles and Di: The Truth Behind Their Wedding revealed what Prince Charles allegedly thought of Princess Diana ahead of their nuptials. He supposedly said, according to the Daily Express: “She does not look old enough to be out of school, much less married.” Yikes.

His Proposal Was... Interesting

The story of Prince Charles' and Diana's engagement is a bit cringeworthy, mostly because of his response to his fiancée professing her love. Diana recounted the proposal to Andrew Morton, the author of Diana: Her True Story — In Her Own Words.

"He said: 'Will you marry me?' and I laughed. I remember thinking, 'This is a joke,' and I said: 'Yeah, OK,' and laughed," Diana told Morton, according to the Daily Mail. "He was deadly serious. He said: 'You do realize that one day you will be queen.' And a voice said to me inside: 'You won’t be queen but you’ll have a tough role.' So I thought 'OK,' so I said: 'Yes.' I said: 'I love you so much, I love you so much.' He said: 'Whatever love means.'”

The Royal Wedding Was A Hit, Though

Prince Charles' comments about the royal wedding, however, were a bit more optimistic. Three months after the royal wedding in 1981, Prince Charles reflected on the historical day. "We still cannot get over what happened that day," he said, according to The Telegraph. "Neither of us can get over the atmosphere; it was electric, I felt, and so did my wife ... It made us both extraordinarily proud to be British."

He Couldn't Say He Was "In Love" After Their Engagement

Following news of Prince Charles' engagement to Princess Diana, the couple sat down for an interview. When asked if they were in love, Diana answered, "Of course," while smiling. Prince Charles' answer was a bit definitely awkward, however, as he replied, "Whatever 'in love' means."

Umm, what? It's kind of odd to say that while sitting next to the gorgeous Diana Spencer, right? And I guess this is a favorite phrase of his, as he supposedly said it to his fiancée after their proposal.

On The Topic Of Faithfulness

In June 1994, Prince Charles was asked during a TV documentary if he tried to be "faithful and honorable" to Diana after their marriage by British reporter Jonathan Dimbleby, according to The New York Times.

"Yes, absolutely," he answered. "And you were?" Dimbleby replied. "Yes," Prince Charles came back with. "Until it became irretrievably broken down, us both having tried."

You know what they say: Hindsight is 20/20. And as far as Prince Charles' quotes about Princess Diana are concerned, this seems to ring true.