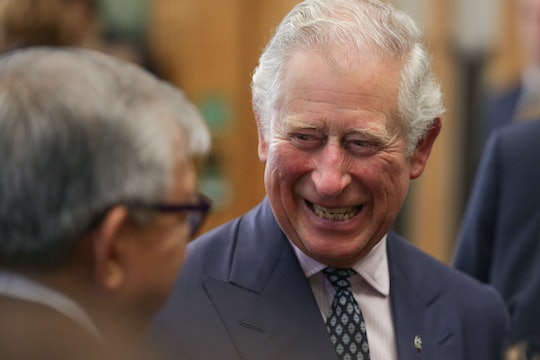 Prince Charles Responded To Royal Baby No. 3’s Birth In The Most Hilarious Way

On Monday, the Duke and Duchess of Cambridge became parents to another son. For one shining moment, nothing else in the news mattered because a baby prince joined the royal family. As news of the newest royal baby's arrival traveled quickly around the globe on Monday, the world offered up congratulations to Prince William and Kate Middleton on the birth of their third child. Some of the best reactions, however, came from members of the royal family itself. And Prince Charles responded to royal baby no. 3's birth in the most hilarious way.

The still-unnamed prince is Prince Charles' third grandchild — and apparently, the thought of three energetic grandkids seems a bit daunting to the Prince of Wales, E! Online reported. On Tuesday, Prince Charles, 69, released a statement on behalf of himself and his wife, Camilla, Duchess of Cornwall. “We are both so pleased at the news,” Charles said in a statement. “It is a great joy to have another grandchild, the only trouble is I don’t know how I am going to keep up with them.” (LOL. Awww.) The thing is, I have a feeling it won't be too long before Prince Charles has even more grandchildren.

Although Prince William and Middleton may ultimately decide to have more children, Prince Harry is getting married to Meghan Markle next month, after all. And he reportedly wants children in the near future, InStyle reported. So it might not be too long before George, Charlotte, and the new little prince have cousins to play with — and Prince Charles has even more grandchildren to "keep up with." Katie Nicholl, a royal expert and author of Harry: Life, Loss, and Love shared with Entertainment Tonight in March Prince Harry's desire to start a family. "My sources are saying that Prince Harry, particularly, is very keen to start a family, pretty soon after the royal wedding," Nicholl told ET Online. "He's made no secret about wanting children."

Although I realize Prince Charles' comment about not being able to keep up with his grandchildren was probably in jest, it seems like he's doing just fine with his grandfatherly duties. In fact, Prince Charles seems to have piqued Prince George's interest in one particular hobby of his: gardening. In April 2017, Prince Charles was speaking on BBC Radio 4's Gardeners' Question Time about bonding with his grandson in the Royal Gardens at Highgrove, Country Living reported. "You never know, do you, what people are going to be interested in," he said. "The most important thing is I got him planting a tree or two here, so we planted it together and shoveled in the earth." Prince Charles continued:

That's the way, I think, when you are very small, and then each time they come you say, "Do you see how much the tree has grown, or whatever?" and you hope that they take an interest.

Aside from Prince Charles' humorous reaction to the birth of his third grandchild, other prominent reactions to the birth of the third royal baby include an official statement from Queen Elizabeth II, the Duke of Edinburgh (Philip,) Prince Charles, the Duchess of Cornwall (Camilla,) and Prince Harry, People reported. A tweet from Kensington Palace listed these specific royals, adding, "Members of both families have been informed and are delighted with the news."

And in case you missed it, President Barack and First Lady Michelle Obama's reaction to the newest royal baby's arrival is simply adorable. "Barack and I are thrilled to congratulate The Duke and Duchess of Cambridge on their newest arrival!" the former first lady tweeted on Monday, HuffPost reported. "We hope to meet him soon for a Kensington Palace pajama party. I’ll wear my robe!" LOL. (I expect photos of this, too!)

Overall, the world seems thrilled that Prince William and Kate Middleton have welcomed another royal baby. And even if Prince Charles is truly worrying how much longer he can "keep up" with his growing number of grandkids, I have little doubt that he'll still find special ways to connect with them — even if their little kid energy does wear him out.