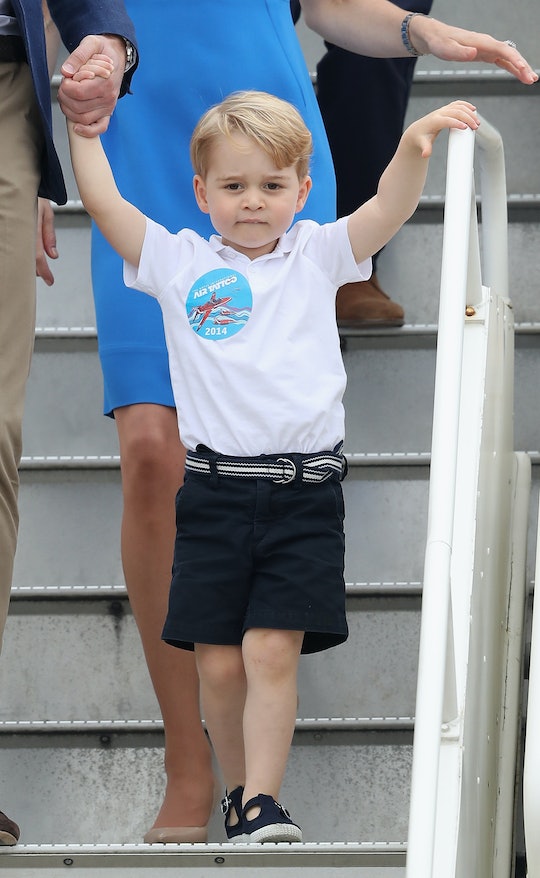 Prince George Loves To Make A Mess In The Kitchen, Because He's A Total Threenager

He might be the future king of England, but when it comes to getting messy, the Duchess of Cambridge said Prince George is just like every other 3-year-old, according to People. In a visit to the Youthscape project in Luton with husband Prince William Wednesday, Kate admitted that Prince George loves to make a mess in the kitchen, and as she watched a group of teenagers baked some chocolate treats, she described her own attempts to bake with her son, telling the group, "when I try to do this with George at home, chocolate and the golden syrup goes everywhere. He makes so much mess. It's chaos."

But it sounds like Prince George's affinity for messy play doesn't end in the kitchen. In a separate visit to Luton's Keech Hospice, Kate checked out the center's sensory play room for children, and told local mom Suzanne Dow that Prince George loves to play with spaghetti, and that "he'd love to get messy," according to the Mirror. And honestly, is there anything more life-affirming than knowing that even the Duchess of Cambridge gets stressed out by toddler messes? She might have preternaturally shiny hair, an impeccable wardrobe, and live in a sprawling country estate with staff to assist her, but not even Kate can keep from losing her mind when her threenager spills golden syrup all over her kitchen. Ah, motherhood.

The official royal visit to the area continued the following day as well, when the Duke and Duchess stopped by the YoungMinds helpline, which assists parents of children who are suffering from mental health issues, according to The Daily Mail. The choice to support the various charities make sense for the couple, who often champion causes for children (particularly children's hospices), and William and Kate are also advocates for mental health, as patrons of the Heads Together campaign along with Prince Harry. During the visit to YoungMinds, Prince William became quite candid about his own emotional struggle, reminiscing about his anxiety during his school years, and also about the emotional toll his job as an Air Ambulance pilot often takes on him. As he prepared to listen in on a helpline call, William said,

Can I have an easy one please? I'm carrying a lot of things at the moment. I will be in floods of tears at the end otherwise. I've had too many sad families with the Air Ambulance. I can't deal with any more stuff. Just maybe at the lower level, if I can.

But that wasn't the first time during his visit that Prince William was so uncharacteristically candid (at least, by royal standards) about his own struggle. A day earlier, at the Keech Hospice, William spoke to 14-year-old Ben Hines, who lost his mother a year ago, according to The Daily Mail. Having, of course, lost his own mother when he was around the same age, William comforted the boy, resting a hand on his arm and telling him "time makes it easier." He also told Hines how much he could relate, saying, "I know how you feel. I still miss my mother every day — and it's 20 years after she died."

There's no doubt that the couple's patronage of charities like Youthscape, Keech Hospice, and YoungMinds helps immensely to raise the profile on important causes that many people might not otherwise know about. According to The Daily Mail, after visiting YoungMinds, and listening into live calls from parents looking for assistance, William spoke about the impact of hearing the calls, and the importance of knowing that something like YoungMinds exists:

I found it very eye-opening. I thought the service was fantastic. I think the idea that you've got these very caring, lovely people on the end of the phone who listen for as long as they need to, to build the picture of what is going on, and then provide extremely good advice — and then the fact that you've got the mental health professionals later down the line if necessary.

I think that is a really good balance of getting the right support straight to these families who are clearly at their wits' end at what to do, and reaching out. Thank goodness they do reach out to something like this. I think it is fantastic.

Kate also spoke about what she had taken away from her visit, and discussed how it particularly had an impact on her as a parent:

What we've taken away is just how normal it is. We are parents ourselves, I am sure we will face worries — we do face worries, because we've got small young children. If those worries escalate, how vital it is to get support — and you are providing that support.

As a parent and as a mother, having that feeling that there is somebody there that is non-judgmental, that can provide the professional support, and that can really provide helping hand at a really difficult time.

Even though, when it comes to the royals, so much attention is paid to things like what they're wearing or how they look, visits like these show that, the attention they can bring to important causes really does have a valuable influence. And although though they have the eyes of the world on them pretty much always, the reality is that William and Kate are also just parents trying to raise their kids the best they can like everyone else. And they have the messy kitchen to prove it.