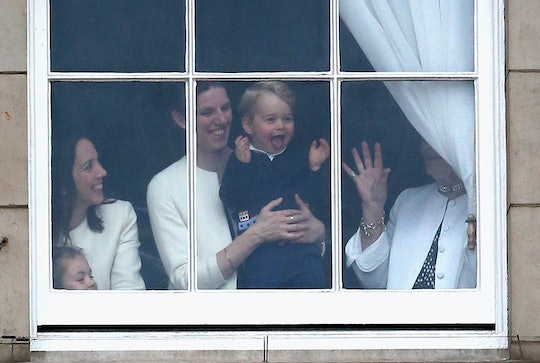 As modern royals, the Duke and Duchess of Cambridge are totally hands-on, involved parents, but they definitely don't do it all by themselves. Given that their royal duties often involve traveling and appearing in public looking perfectly polished — sometimes with their three young children in tow – it's no surprise that the couple relies on the help of a nanny to keep things moving smoothly. And given the high-profile nature of the job, it's also no surprise that the woman they've chosen is a total pro. In fact, Prince George and Princess Charlotte reportedly have a "no-nonsense" nanny caring for them full-time, according to The Sun, and honestly, it sounds like all parents could probably use a little extra help from a royal nanny like Maria Borrallo.

If you've seen photos of Borrallo helping out at various royal engagements, then it's already pretty easy to tell that she's not your average nanny — dressed in her brown uniform, complete with hat and gloves, she pretty much looks like a real-life version of Mary Poppins. But in a recent interview with The Sun's Fabulous Magazine, author Louise Heren spoke a bit about what nannies like Borrallo are taught at the prestigious British nanny school, Norland College, and it's easy to see why the duke and duchess looked to the school when it came time to hire some help.

Borrallo made her public debut as the Cambridges' nanny back in April 2014, when she accompanied the family on Prince George's first trip to New Zealand, according to People. But she wasn't exactly new to the job: the magazine noted that Borrallo had moved into Apartment 1a at Kensington Palace the month before, and had been spotted taking Prince George out for walks in his stroller.

Two more royal children later, and 48-year-old Borrallo is still William and Kate's live-in nanny, so it definitely seems to be a great match. But from the sounds of it, that's not exactly surprising. Heren, whom The Sun referred to as a "Norland expert," said Borrallo would have been impeccably trained, and that she'd take a fairly disciplined approach to caring for the young royals — think lots of outdoor play regardless of the weather, introducing a variety of different foods to avoid picky eating habits, and following a daily routine that includes a 7 p.m. bedtime.

Of course, helping with the day-to-day tasks of caring for the royal children isn't *really* what makes Borrallo's job so hard. Given their lineage, the youngsters are held to a unique standard — unlike others their age, they'll have to know how to wave, bow, curtsey, and to generally handle appearing in front of crowds and cameras without throwing a total fit — and anyone who's spent any amount of time around young kids knows they can definitely be unpredictable.

But it sounds like Borrallo also has a well-rehearsed strategy: according to Heren, since Norland nannies are almost always employed by wealthy, well-to-do families, Borrallo would know how to prepare Prince George and Princess Charlotte ahead of scheduled public appearances, so there won't be any surprises. She explained,

[The nanny will] say, 'This is your opportunity to show Mummy and Daddy just how wonderful you are, and you are to smile and be really good for them and then we can go inside and play.'

Training as a Norland nanny isn't easy though: according to The Spectator, a nanny like Borrallo would have to complete a three-year course teaching them everything they might need to know about caring for children. But it's not just about diaper-changing: Norland also teaches students self-defence and getaway driving, just in case.

Luckily for Borrallo, her days at the palace likely don't involve either of those skills, but it probably affords William and Kate some piece of mind. And though Prince Harry and Meghan haven't yet shared whether they plan on hiring a nanny, it seems that, given Borrallo's relationship with William and Kate, she could probably pass along a name or two if they wanted.