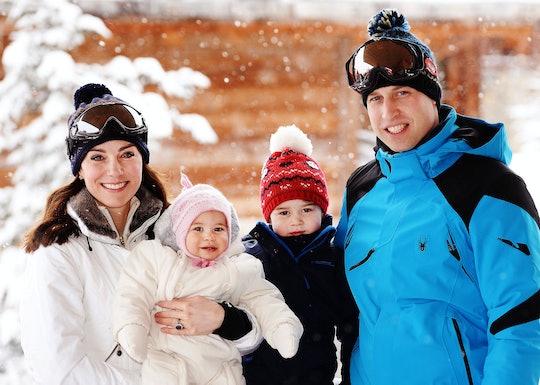 The Duke and Duchess of Cambridge aren't ones to pass up the opportunity for some quality family time with their little ones. Despite their numerous obligations and seriously busy schedule, the two prioritize time together whenever they can. And because Prince George and Princess Charlotte's schools are on break right now, their parents are taking some time away from their royal duties to focus on their most important job: raising those three sweet littles.

According to Hello! Magazine, Prince George and Princess Charlotte's schools — Thomas's Battersea school and Willcocks Nursery School, respectively — have closed down for a week for half-term break. And in order to be around for their children's time off of school, Prince William and Middleton have cleared their schedules of any and all royal engagements or outings for the coming week.

Kensington Palace has not shared any details on how Prince William, Middleton, and there three children will be spending this week together. However, they often head to Anmer Hall, their vacation home in Norfolk, to get away from the hustle and bustle of life at the palace, People reported. You may recognize the home from their adorable family Christmas card photo shoot this year. It certainly does look like a cozy getaway.

Aside from Anmer Hall, another family favorite destination for the holidays is the small, private Caribbean island of Mustique. According to its official website, the island is "one of the most private and safest places in the world, with a first class security and medical team on [the] island to ensure our guests and the community enjoy carefree island living."

The Duke and Duchess of Cambridge have made use of the privacy regularly since 2008, according to Vogue, so they could head south for the week with their kids. They took the little royals to the islands back in July, according to Marie Claire, so they likely have a routine in place for family beach days. In the dead of winter, who could pass up a little tropical warmth?

But should they decide that tropical beaches can wait for another season, the royals have another vacation destination that may be calling their names over the half-term break: the French Alps. A few years back, Middleton, Prince William, George, and Charlotte all went for a ski vacation. This 2016 trip afforded the public some seriously sweet photos of the royal family bundled up in ski gear. Now that George and Charlotte are a bit older, perhaps their parents will be heading there for their kids to hit the bunny slopes themselves.

No matter how they end up spending the time together, I have no doubt that Middleton and Prince William will make the most of it. Since becoming a family, the Duke and Duchess have dedicating themselves to creating a life for their children that focuses on the importance of family. Even though they hold such high statuses and wear so many hats, Prince William and Middleton take steps to create as "normal" of a family life for their children as they can.

A source close to the family told Harper's Bazaar that Prince William and Middleton take the kids to school themselves, squeezing in time together whenever they can. Middleton even does much of their grocery shopping herself — talk about a level-headed duchess.

Little ones grow up so quickly, as I'm sure the Duke and Duchess of Cambridge could contest. Before you know it, your little baby is out the door and headed to school. With the years flying by, time like half-term break is best spent together making memories.

More Like This
Elon Musk Shares New Photos Of Son, X, With His Own Twitter Badge
The 4 Main Parenting Styles & Which Is Best For Kids
How To Make Santa Footprints
The 35 Top Toys For 3-Year-Olds