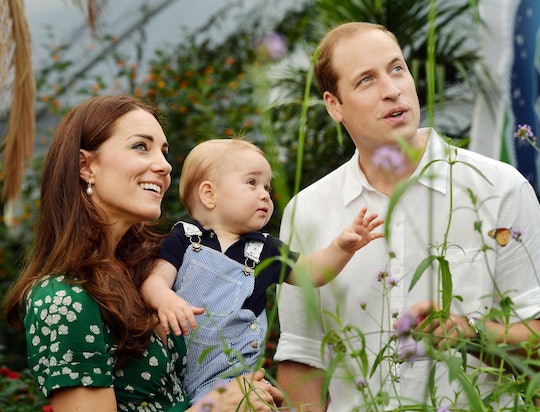 With every year that passes, there are certain traditions we all look forward to when it comes to the royal family. Though some celebrations are very public — such as weddings — others are a bit more private, like birthdays. However, the Duke and Duchess of Cambridge make sure to give everyone an annual update on their children, most recently with Prince George's birthday portraits in honor of him turning 6 years old on July 22. And looking back at his other portraits from past years shows just how fast this adorable royal is growing up right before our eyes.

It seems like just yesterday that Kate Middleton stepped outside the doors of the Lindo Wing in her light blue, polka-dotted dress, to introduce to the world her first child, and the son who would be third in line to the throne of England. Prince George has given us aspirational, casual fashion, an abundance of memes, and if nothing else, proof that Prince William and Middleton are amazing parents, and the next generation of royals are going to continue to be as beloved as those before them.

This year, @KensingtonRoyal, the Cambridge family's Instagram account, posted three photos snapped by Middleton, one showing Prince George laughing in the grass. It's a sweet moment, one that makes us want to look back at all of the other birthday tributes before it.

Wearing a Nike soccer shirt and laughing in the grass at home is pretty much the sweetest combination you can get for a 6-year-old. Kensington Palace shared that the photos were taken by Middleton in the garden of their home.

Last year, when Prince George turned 5, the Cambridges posted a sweet photo of him wearing traditional English clothes and posing while standing in front of a brick wall, meaning that Duke and Duchess of Cambridge are pretty much Instagram influencers now. The couple thanked everyone once again for their warm wishes as Prince George had then been alive for half a decade, which seems like so long if you really think about it.

For his fourth birthday, Prince George received some very royal treatment in the form of professional photographs. Kensington Palace noted that his birthday pictures were taken at the end of June of 2017 by photographer Chris Jackson. "The Duke and Duchess are very pleased to share this lovely picture as they celebrate Prince George's fourth birthday," the post read, "and would like to thank everyone for all of the kind messages they have received."

By age 3, Prince George opted for some casual photos of himself strolling through his backyard. Kensington Palace shared the photos were taken by photographer Matt Porteous at the family's home in Norfolk. Prince George wore a sweater with a whale on it (the future Prince of Wales, anyone?) as well as shorts and sensible walking shoes.

For one of his more personal photo ops, photographer Mario Testino captured Prince George laughing towards the camera while being held by his father, Prince William. At only 2 years old, it was already clear that Prince George was full of personality, which has totally proven to be true over the years.

Prince George's first birthday portraits were taken at the Sensational Butterflies exhibit at the Natural History Museum in 2014, according to Harper's Bazaar. The young royal celebrated turning 1 year old with his parents, who enjoyed the sights and wildlife with their son.

It's obvious that Prince George and his family love the outdoors, documenting milestones, and more than anything else, being together. They are absolutely the sweetest family, and all of their adoring fans are undoubtedly wishing Prince George a very happy 6th birthday, and many more to come.