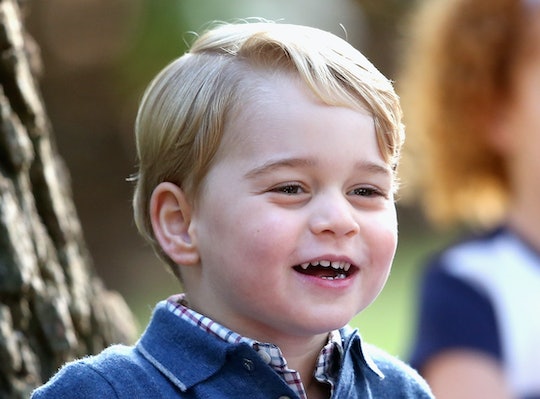 Prince George Apparently Has An Adorable & Rather Unique Nickname For Himself

"Monkey," "Pea-pod," "Cheeks" — these are just a few of the nicknames that my husband and I have for our 8-month-old. As the years go by, I'm sure she'll develop even more, perhaps some that she makes up for herself, since that's just a thing kids do. In fact, Prince George's nickname for himself is unique and totally adorable, to say the least. But that's not all too surprising considering the big personality that he has developed in just the few short years that he's been around.

Prince George has made a name for himself as a bit of a joker of the royal family. From hysterical laughing fits at Princess Eugenie's wedding, to marching in place like a toy soldier at another family event, he's quite the kidder. And that sense of humor extends to interviews with the public, it seems. While out with his sister and grandmother, the little prince reportedly started a chat with a stranger who was walking her dog.

The women he spoke with — who chose to remain anonymous — recalled the exchange to The Sun. “Just to be friendly I engaged in a bit of small talk and I asked George what his name was, even though obviously I knew it," she told The Sun. “To my astonishment, he said ‘I’m called Archie’ with a big smile on his face ... I don’t know why he calls himself Archie but kids often play with their names and I think it’s lovely."

Prince George didn't specify if Archie is his nickname for himself, something that the royals call him — or if he's just really into Riverdale right now — but no matter where the name came from, it's pretty darn cute.

Along with making up nicknames for himself and approaching strangers' dogs, Prince George also seems to enjoy expressing himself through dance. During an interview for the private reception with BBC Radio One's Teen Hero honorees, Prince William shared that his son George enjoys dancing as much as another favorite royal: Princess Diana, as ELLE reported. "George is doing dancing as well, he loves it. And it's kind of … my mother always used to dance, she loved dancing," Prince William said, according to ELLE. He added that there are simply no concerns about whether or not dancing is an appropriate passion for a little boy: "And if it's something you love, you do what you love. Don't let anyone else tell you otherwise. Keep at it."

According to People, Prince George has been getting some pretty awesome ballet dancing lessons at school as a part of his Year 1 curriculum at Thomas’s Battersea, and I have a feeling they are a part of why he enjoys dancing so much. Each week, he and his classmates receive a 35-minute ballet lesson, accompanied by a live pianist, according to Harper's Bazaar. The kiddos are working their way through the Royal Academy of Dance Pre-Primary in Dance syllabus that aims to develop the students’ physical skills, boost their stamina, and foster creative expression and musicality, according to People.

Funny nicknames, favorite subjects in school, endless joking around — Prince George sounds like any old kid you'd meet in your own childhood. Thanks to Prince William and Kate Middleton, he and Princess Charlotte reportedly aren't given special treatment. In fact, Prince George doesn't even know that he's in line for the throne, as Prince William told The Sun. Instead, the Duke and Duchess of Cambridge aim to give the kids a normal life. “There’ll be a time and a place to bring George up and understand how he fits in, in the world," Prince William said, according to The Sun. “We are very normal."

I guess normal is a bit relative, considering who they are. But allowing little kids to be little kids — i.e. letting them call themselves "Archie" — is a big part of fostering that normalcy.