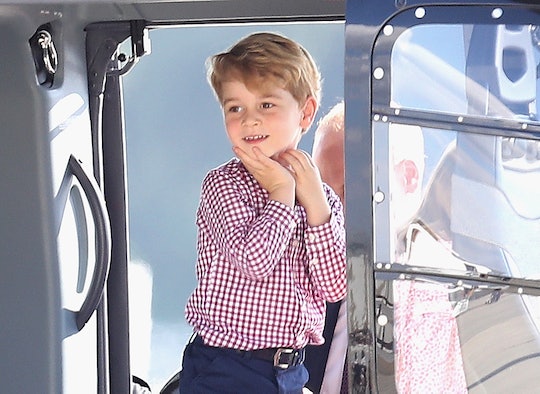 It Didn't Seem Possible, But Prince George's Obsession With Helicopters Got Cuter

It's difficult to describe in words, but there's something heartwarming about a kid who loves something intensely. Whether that something is dinosaurs or outer space, a young child's fascination with the world is endearing. This sentiment is especially true for 5-year-old Prince George, who remains obsessed with helicopters. Cue the awws.

Prince George is a young guy with a lot of interests. The royal has an affinity for dinosaurs, with Prince William revealing in September that he's the dino aficionado in the family.

"George is obsessed with dinosaurs so we're learning all about them," said during a visit to the Acorns Hospice center in Birmingham, England, as Hello! Magazine reported.

But wait — that's not all. Prince George is also a stickers fanatic. "He is big into his stickers," Prince William shared in May 2017, according to Hello! Magazine.

Photos of the event featured a thrilled Prince George, with one of the precious pics going viral. The pic in question shows the young royal touching his face in awe and wonder. It's iconic.

Spoiler alert: Prince George's joy concerning helicopters lives on. Prince William (he's basically Prince George's publicist at this point) confirmed the news during a visit to a military base in Cyprus Wednesday.

While chatting with a group of British soldiers, Prince William said: “I told George this morning we were going to see the pilots today,” as Harper's Bazaar reported. “And he said, ‘If you see a helicopter can you take a picture?’”

Although it's not clear if Prince William was able to snag a picture of a helicopter, it's clear Prince George remains committed to his adorable interests.

It's possible Prince George will ask for a toy helicopter this Christmas. Last year, he requested a police car, according to Vanity Fair.

Speaking of Prince George's holiday season so far, he had a rocky Tuesday afternoon concerning sweets. It all started when his parents held a Christmas party for military families at Kensington Palace, a event that featured a ton of goodies. Prince George spied the desserts before he left for school, but by the time he returned, all of the goodies were already gone.

“We took the children down to where the party was but everything was gone,” Kate Middleton said, according to People. “They were so disappointed!”

Aww, poor Prince George. I think another photo-op in a helicopter is in order after this disappointment — I have a feeling that would cheer the young royal up ASAP.