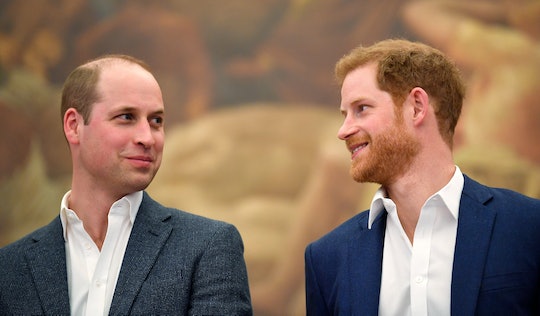 When siblings are young, knock-out-drag-down fights are par for the course. And when children grow into adults, tensions settle down — but they don't disappear entirely. Different personalities and life choices can still come between family members, even when those family members are royals. And recently, Prince Harry addressed rumored "rifts" with Prince William in a candid interview for a new ITV documentary, explaining that while things aren't always perfect between the two of them, at the end of the day they'll "always be brothers."

Rumors of bad blood between the brothers have been circulating for some time, as HuffPost reported. When Prince Harry and wife Meghan Markle split from their joint charity with Prince William and Kate Middleton earlier this year, the rumor mill went wild speculating on the cause of the divide. Rather than continue to work under the single cause, the couples created two separate charities. Sources at the time denied any in-fighting, instead explaining the move as “largely about preparing both couples for their future roles, which are obviously on divergent tracks,” according to Metro.

That wasn't enough to squash the rumors, though. In a made-for-TV documentary for ITV News, Prince Harry and Markle opened up about a variety of personal topics, including the supposed conflict between Prince Harry and Prince William.

For the first time, Prince Harry not only acknowledged the rumors, but sort of confirmed them. When ITV reporter Tom Bradby asked, "There's been a lot of news in the press about rifts with your brother. How much of that is true?" And Prince Harry responded, "Part of this role, part of this job, this family, being under the pressure which it's under, inevitably stuff happens. But we are brothers. We will always be brothers."

He went on to explain how he and Prince William simply live different lives — as do all adults, I might add. "We are certainly on different paths at the moment, but I will always be there for him, and as I know he will always be there for me," he told Bradby. "We don't see each other as much as we used to as we are so busy. But I love him dearly and you know the majority of the stuff is probably — well, the majority of the stuff is created out of nothing. But as brothers, you have good days and you have bad days."

Aside from their charitable work, the brothers' marriages and wives have been a big source of media speculation. And while Prince Harry didn't comment on that in the interview, a source close to the family told People back in December that Markle and Middleton have impacted the brothers' relationship to an extent. “They are very different characters,” the source said. “Wives do change the dynamic, and they both have very strong wives,” the family friend added. “If you bring two independent-minded women from the real world into the royal world, they are going to want to have an impact.”

Markle also appeared on the documentary, speaking on her experience since joining the royal family. In the face of so much pressure, she has "really tried" to adopt the typical British stiff upper lip, but it can be "really damaging" mentally and emotionally, according to E! News. "I never thought that this would be easy, but I thought it would be fair and that's the part that's really hard to reconcile," she said.

When Bradby asked her how she was dealing with it all, Markle replied, "Thank you for asking because not many people have asked if I’m OK. But it’s a very real thing to be going through behind the scenes." Bradby asked if that means she's "not really OK," and Markle simply said, "Yes."

For me, the main takeaway of these interviews is that royals are, in fact, human. Brothers sometimes disagree; wives have real feelings; and life is hard. Who would've guessed?