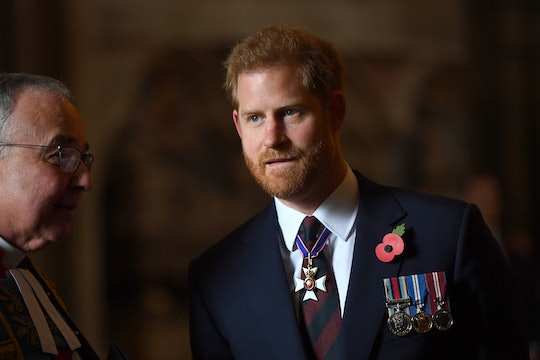 Prince Harry Just Canceled His Trip To Amsterdam For This Reason

Prince Harry and Meghan Markle's first child's arrival could happen any day now, if it hasn't already. Although the royal family has remained silent, there is now another major reason why people think the baby's arrival is imminent. It's because Prince Harry canceled his trip to Amsterdam on Friday, and of course, everyone thinks it's because of the new royal baby.

Earlier this week, Buckingham Palace announced that Prince Harry would be traveling to the Netherlands (Amsterdam and Hauge, specifically) on Wednesday, May 8 and Thursday, May 9, according to Town & Country. During this visit, Prince Harry was supposed to partake in official royal duties (as he does best) and begin the one year countdown to the 2020 Invictus Games. That sounded like one very busy trip, especially since he would be leaving his newborn with Markle or risk missing his baby's birth.

But, on Friday, royal family reporter Carolyn Durand tweeted that Prince Harry's trip was canceled, according to Us Weekly. "The Duke of Sussex has canceled his planned trip to Amsterdam next Wednesday, but he IS still planning to travel to The Hague on Thursday for the launch of Invictus Games, The Hague 2020 BP has told me," Durand wrote.

This led many to wonder if there was a specific reason behind this decision that had to do with the royal baby.

But people shouldn't get their hopes up just yet. Chris Ship, the royal news editor for ITV tweeted that Prince Harry's trip was canceled due to "planning issues." Not to mention Prince Harry's trip was only moved by one day. If Markle was set to give birth (or has already given birth), wouldn't he cancel the trip altogether? Canceling one day of the trip isn't enough to signify that Markle has given birth (or is about to give birth).

People need to give the Sussexes some space. Although it has been super fun to speculate, not every decision they make is related to the birth of their child. The couple has said that they won't be revealing when Markle goes into labor. In early April, Buckingham Palace released a statement, detailing when Markle and Prince Harry would announce the arrival of their child, according to People.

"Their Royal Highnesses have taken a personal decision to keep the plans around the arrival of their baby private," the statement read. "The Duke and Duchess look forward to sharing the exciting news with everyone once they have had an opportunity to celebrate privately as a new family."

Based on this statement, it's quite possible that Markle hasn't given birth yet. Prince Harry hasn't stopped making official appearances, even appearing at the London Marathon earlier this week, according TODAY. And since he has continued to make public appearances, this could indicate that the baby will be arriving some time in the future. Although it is speculated that Markle's due date was in late April or early May, Markle never confirmed a specific day, according to Town & Country.

While there are some strong clues that indicate that Markle has already given birth, Prince Harry postponing his trip to the Netherlands isn't necessarily one of those clues.