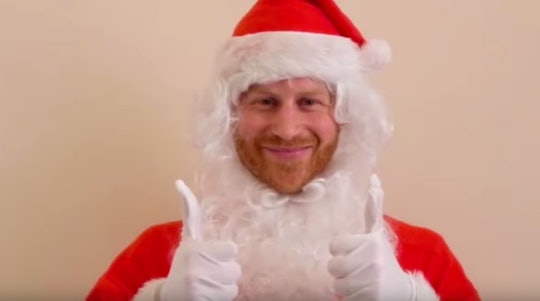 Ho, ho, ho, it's ... royalty? One of the last people you'd expect to sporting Old Saint Nick's signature white beard and red suit is an actual prince. Yet, here we are. That's because Prince Harry dressed up as Santa Claus for a cause dear to him. And his heartwarming message is sure to put a smile on your face.

What might prompt a prince of England to dress up like Santa, you ask? The festive stunt was actually done to support of a nonprofit organization called Scotty's Little Soldiers. This British charity supports children whose parents have died while serving in the armed forced. And considering Prince Harry, himself, lost his mother Princess Diana at the age of 12, the cause is something that definitely hits home.

In a heartfelt holiday message, Prince Harry spoke earlier this month to kids who had attended a Scotty's Little Soldiers Christmas party on a boat on the Thames River in London, according to Entertainment Tonight. "Ho, ho, ho, hi guys!" the Duke of Sussex greets the kids while dressed as Father Christmas. "I hope you're having an amazing time. I hear there's 190 of you there this year, so please cause as much chaos as humanly possible. "I also want to encourage you guys to look around and realize that you are part of a family."

Prince Harry continued his message by reminding the kids that they are strong while also acknowledging how difficult is to lose a parent. "Losing a parent is incredibly hard, but I know that every single one of you — by helping each other out — that you will have an amazing future ahead of you and a fantastic Christmas as well," he says in the video. "Your parents, they will never be forgotten and you will never be forgotten."

Prince Harry doesn't often bring up how losing his mother has affect him. However in May, the Duke of Sussex traveled to The Netherlands — not long after Archie was born — to launch the countdown to the 2020 Invictus Games. There, the new dad opened up about losing his mother with fellow army veteran, Dennis van der Stroon, who had also experienced the death of his mom.

“I told Harry about my mother and we talked about our shared experience of missing a mom,” van der Stroon told People at the time. “He said missing a mother is like missing some kind of security, how you need that as a son and it falls away when you lose your mother. He said he meets a lot of people in his work who have lost a mother, father, sister, brother or relatives and when he hears their story, as he heard my story, he said he doesn’t feel so alone.”

Between creating a mental health PSA with Ed Sheeran in October and now dressing up for Santa for kids who lost their parents, Prince Harry seems to be down for pretty much anything when it comes to supporting causes that are near and dear to him. And he never fails to bring a smile to royal fans' faces. I can't wait to see what the Duke of Sussex has up his sleeves for 2020!