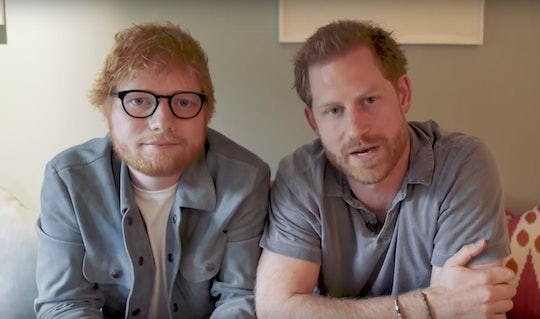 It might be an unlikely duo, but as it turns out, two of Britain's most famous gingers have more in common than just their hair. Indeed, Prince Harry and Ed Sheeran's "Mental Health Day" collaboration is here, and save to say, it's as important as it is entertaining.

World Mental Health Day 2019, which takes place today, Oct. 10, exists in order to raise awareness for mental health issues around the world. The day aims to "mobilize efforts in support of mental health," as it provides an opportunity for "all stakeholders working on mental health issues to talk about their work, and what more needs to be done to make mental health care a reality for people worldwide," according to the World Health Organization (WHO).

The duo collaborated for a video, which was posted on the Duke and Duchess of Sussex's Instagram account. In it, they discussed not only the importance of mental health awareness, but also how you can keep an eye out for the signs and symptoms that someone is struggling. Though the topic was undoubtedly serious, the two also incorporated some humor, which surely made the video that much more effective.

Mental health problems can very seriously impact your life, as well as the lives of those around you, and, in their video, Prince Harry and Sheeran recognize how important it is to discuss these matters.

The video opens with Sheeran preparing to meet with Prince Harry, and expressing how grateful he is to be part of the collaboration. When he arrives at Frogmore Cottage, Prince Harry welcomes him, and then they get into their conversation. Sheeran notes it's something he's "quite passionate" about, to which Prince Harry agrees.

"This for me is a subject and conversation which is just not talked about enough, I think people all over the world are really suffering," Prince Harry begins. "Well, I've actually been trying to write a song about this, to get it out to more people," Sheeran says. "Well, that's what I'm saying, someone with your skillset, to be able to to write lyrics... to raise awareness, that would be amazing," Prince Harry agrees.

"That's exactly what I'm trying to do," Sheeran continues. "People don't understand what it's like for people like us. With the jokes and snide comments. I just feel like it's time we stood up and said, 'we're not going to take this anymore. We're ginger and we're going to fight,'" he concludes, joking. Prince Harry follows up by clarifying it's a meeting about World Mental Health Day, and Sheeran quickly nods and gets back to his laptop.

Despite the jokes, the two conclude the video together with a serious message, encouraging others to "look out for" one another.

"Both Prince Harry and Ed Sheeran want to ensure that not just today but every day, you look after yourself, your friends and those around you," the caption on the post begins. "There’s no need to suffer in silence — share how you’re feeling, ask how someone is doing and listen for the answer. Be willing to ask for help when you need it and know that we are all in this together."

Whether they're advocating for hair color equality or mental health awareness, it's clear that this is a duo that's serious about social justice, and the well-being of others. So whether it gave you a laugh or reminded you to check in on those you love, mental health is a serious issue, and thankfully, these two beloved red heads are using their platform to bring attention to it.