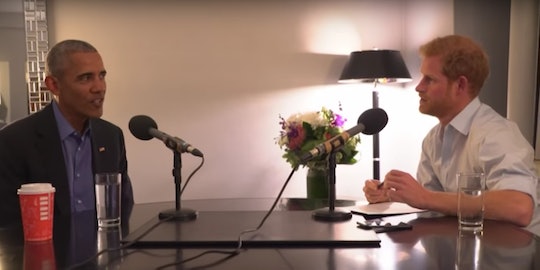 If there's one thing to keep a glimmer of hope shining during these dark and trying times, let it be this: Prince Harry's interview with President Barack Obama is just about everything you need to see this month. OK, OK, so maybe you might want to go see your family and friends, some pretty lights, or whatever else during the holiday season, but this interview will definitely be on your list. Yes, folks, make sure you mark your calendars for Dec. 27 for the best present you could ask for.

While the preview clip of Prince Harry's interview with Obama looks entertaining, the full interview won't be available until two days after Christmas. Nevertheless, based on what's been released thus far, it seems as though Obama and Prince Harry could very well be on their way to a bromance the likes of which haven't been seen since Obama and Vice President Joe Biden.

As many Americans will remember, Obama is pretty well known for his legendary dad jokes. And if the preview clip is any indication, then his latest interview with Prince Harry is sure to be chock full of some grade A, dad-inspired humor. Which, if we're being honest, is something the entire world could really use right about now.

Prince Harry was guest-editing BBC Radio 4's Today show and decided to interview Obama, according to the BBC. The full interview will be broadcasted later in December, but the news outlet reports that it was filmed in September at the "Invictus Games in Canada." According to the New York Post, Kensington Palace stated that the two leaders would be talking about their "shared interest in building platforms for the next generation."

At the beginning of the preview clip, Obama can be seen joking to the 33-year-old prince that he had a few logistical questions. "Do I have to speak faster because I am slow speaker?" he asked. Then, he came at Prince Harry with the best question of the preview: "Do I need a British accent?"

And even though he was being funny, people were pretty much obsessed with the joke.

Basically, This Teaser Just Made Everyone Really Nostalgic

Clearly, even though he is no longer serving as POTUS, Obama's dad jokes are still going strong. And didn't he promise that? At the 2016 presidential turkey pardoning, he reminisced on his time in the White House, while cracking all the jokes. "We should also make sure everyone has something to eat on Thanksgiving. Of course, except the turkeys, because they're already stuffed."

But, to be honest, even if Obama doesn't crack too many dad jokes during this interview, it will still be worthwhile. As has been noted, he and Prince harry definitely seem to have a pretty legitimate friendship going on.

Yeah, even after Obama's presidency came to an end, he still went out of his way to visit the redheaded royal prince. In May of 2017, Obama stopped at Kensington Palace to visit with Prince Harry during his visit around Great Britain. According to Kensington Palace's Twitter account, "They discussed support for veterans, mental health, conservation, empowering young people and the work of their respective foundations." Additionally, Obama "offered his condolences to the victims of the Manchester attack and support for those recovering from injuries," according to the palace's Twitter account.

And while I, for one, am already counting down the days until the full interview is released, the preview clip will just have to suffice for now. Before the formal interview, Prince Harry also joked that Obama should probably not try to avoid any questions. "If you start using long pauses between the answers, you're probably gonna get 'the face'," he said in the video. Obama then asked what the face was, and when Prince Harry showed him, Obama admitted, "I don't wanna see that face."

Fortunately, there isn't too much of a wait until the full interview video is out. Because seriously, December is one of the most stressful times of the year, and a video of Obama and Prince Harry really talking it out is just what the doctor ordered.