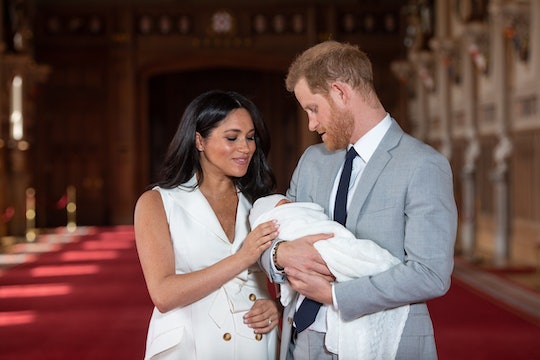 Prince Harry Can't Wait To Travel To Africa With His Family

Baby Archie is well on his way to being a regular globetrotter! After a couple of trips around Europe, the littlest royal is headed to South Africa. The country is near and dear to Archie's dad's heart, and Prince Harry is adorably excited to share his "second home" with Archie and Meghan Markle.

The official Sussex Royal Instagram page shared some of the details of Harry, Markle, and Archie's trip to Africa on Sunday. "In just a few weeks our family will be taking its first official tour to Africa, a region of the world that over the past two decades has been a second home to me," the post reads, as TODAY reported. "Our team has helped create a meaningful programme that we’re so excited to share with you. On a personal note, I can’t wait to introduce my wife and son to South Africa! We’ll see all of you very soon. - The Duke."

Along with a visit to South Africa with his wife and child, Harry will also be "carrying out visits to Malawi, Angola, and Botswana," according to CNN.

Harry and Markle welcomed their son — Archie Harrison Mountbatten-Windsor — on May 6 at the private Portland Hospital in Westminster, according to his birth certificate, which was made public later on in the month, People reported. The details of Markle's birth plan were kept under wraps, but fortunately the family has been more forthcoming about their vacation plans.

While the upcoming trip will mark Archie's first visit to the African continent, his parents have many memories there. Harry spent 2004 in Lesotho, later returning to co-found a charity there, according to E! News. Additionally, he and Meghan visited Botswana together in 2016, and again in 2017 for Markle's birthday, as Cosmopolitan reported. And Royal Family fans will likely remember the couple's honeymoon trip to East Africa just last year.

All of these memories will likely pale in comparison to sharing a place they love with their son. Archie joined his parents on two fabulous trips in August — the first of which was to Ibiza for Markle's birthday. The couple left the UK on Aug. 6, relaxing at a private villa and returning home six days later, as reported by Hello.

Just a couple of days later, the trio was off again; this time to the French Riviera, according to Harper's Bazaar. Harry, Markle, and Archie reportedly flew into Nice on Aug. 16 and spent a few days soaking up the sun. They were photographed leaving that same week, Harper's Bazaar reported.

It is likely that the family will have many exciting adventures in the near future, as Harry and Markle travel frequently for both business and pleasure. Harry's philanthropy often takes him abroad, as he is involved with organizations all over the world. In 2018 alone, Harry had 85 work engagements overseas, according to CNBC; not to mention the 108 engagements within the UK. And Markle isn't exactly resting on her laurels. She had 45 engagements in the UK and 51 overseas, CNBC reported.

Now that little Archie has joined the family, his passport is bound to fill up with stamps in no time. But for now, I'll be content stalking social media for any and all photos of him and his cute parents on their tour of Africa.