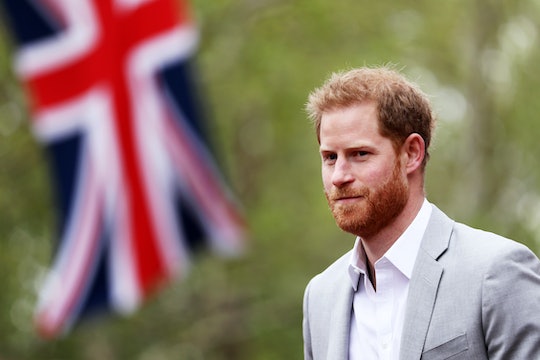 Um, Prince Harry Is Going On A Trip In The Middle Of Royal Baby Watch?!

Given the excitement surrounding the impending arrival of the Duchess and Duke of Sussex's first child, it's no surprise people are paying close attention to the royal family's recent movements. As for the latest detail that has supporters talking? Prince Harry's trip to the Netherlands, which will occur from May 8th to May 9th. Considering Meghan Markle is set to arrive any day now, here's what the Duke of Sussex's excursion could signify for the due date.

The reason for the Duke of Sussex's trip? "His Royal Highness will then travel to The Hague to officially launch the one year countdown to the Invictus Games The Hague 2020," the statement added.

The Invictus Games — an international sporting event for injured servicemen and women — is very near and dear to Prince Harry's heart ever since he founded the event in 2014, according to The Royal Foundation's website. And given the Duke of Sussex's passion for games, it's not too surprising he doesn't want to miss this special milestone.

But what does this mean for baby Sussex? One theory, which I'm hanging my hat on, is that the couple expects the little one to arrive before May 8.

Another possibility is that the baby is already here. This is a popular theory on Twitter, with one person commenting: "I think that Baby Sussex is already here and has been here for a couple weeks, based on the announcement they made."

Someone else said: "WT actual F ... I’m thinking seriously this the baby is booked in for a c section in the next day or two but then why would he leave her so soon after!? Could it be that the baby is actually here already??"

The last option, which sounds pretty reasonable, is that Prince Harry will adjust his plans based on what happens in the next few days. Royal family reporter Victoria Murphy first brought this idea to light, tweeting on Wednesday: "My understanding on this trip is that plans will be reviewed if they need to be. This one year countdown to the Invictus Games is a fixed date which has been in the diary for many months."

Sounds reasonable to me. For starters, I don't think Prince Harry will ditch this commitment if he doesn't have to, and I also don't believe he will leave Markle's side if she's still pregnant by May 8th. Translation: This is probably a flexible plan that's TBD.

That being said, I don't think it's out of the realm of possibility for Markle and Prince Harry to keep the baby's arrival under wraps for the time being.

"Their Royal Highnesses have taken a personal decision to keep the plans around the arrival of their baby private," a recent statement on behalf of the couple read, according to BuzzFeed News. "The Duke and Duchess look forward to sharing the exciting news with everyone once they have had an opportunity to celebrate privately as a new family."

So, while Prince Harry's trip could be a clue about Baby Sussex's due date, fans can't know for sure until the pair confirms the news publicly. Welcome to the waiting game, folks.