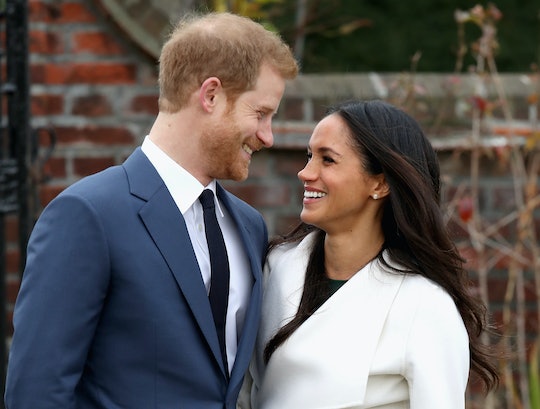 Prince Harry Is Reportedly Ready To Have Royal Babies With Meghan Markle...Like Now

With Kate Middleton's due date with her and Prince William's third child and Prince Harry and Meghan Markle's wedding just around the corner, it seems like everyone's feeling a bit of royal baby fever. And it's not just royal-watchers. As it turns out, Prince Harry is reportedly ready to be a dad and start a family with his bride-to-be soon after they tie the knot this May, according to Entertainment Tonight.

A royal expert named Katie Nicholl spoke to Entertainment Tonight about the 33-year-old's future plans and revealed that Prince Harry has reportedly wanted kids for a while and is excited to start a family with Markle soon. "My sources are saying that Prince Harry, particularly, is very keen to start a family, pretty soon after the royal wedding. He's made no secret about wanting children," she told Entertainment Tonight on Tuesday.

Of course, Prince Harry himself hasn't actually confirmed this bit of news. But Nicholl, who's the author of Harry: Life, Loss, and Love, also told the outlet that Markle herself is "maternal" and was very excited to meet Prince Harry's niece and nephew — 2-year-old Princess Charlotte and 4-year-old Prince George — so it wouldn't be too surprising if the happy couple announced their own plans to start a family soon after their wedding this May.

However, the big day isn't until May 19, so Prince Harry and Markle are likely a little more focused on preparing for that and getting started on their new life together at the moment. And they have been busy on that front. In fact, they've already decided on a wedding cake — a "lemon elderflower cake that will incorporate the bright flavours of spring," according to CNN — and even have a royal wedding beer selected, made from American and English hops.

But, according to Nicholl, once the wedding has passed, Prince Harry might be ready to give his niece and nephew a buddy or two. According to Entertainment Tonight, he has wanted kids for a while now and Nicholl told the outlet that the realization "really kicked in when his brother, Prince William, of course, settled down with Kate Middleton."

And, as it turns out, Prince Harry's desire to have kids isn't totally out of the blue. In an interview with ABC News back in 2016, he explained that he's already looking forward to having kids one day. "I can’t wait for the day. So, you know, it will be fantastic," he said. "I've got a kid inside of me. I want to keep that. I adore kids. I enjoy everything that they bring to the party. They just say what they think."

Fortunately for Prince Harry, it seems like Markle might also be interested in having kids, although again, she herself hasn't said anything specifically about having kids with Prince Harry. But, she has expressed that general desire to have children in the past. For example, in a 2016 interview, Markle revealed that she definitely had a desire to start her own family one day. "I can't wait to start a family, but in due time," she told Lifestyle magazine.

She continued, "I also dream to have a family," she added in the same interview. "It's all about balance, and I have so much happiness in my career and am fortunate to travel the world and see so many amazing things — it will also be nice to be anchored to something grounded and in the same place. Raising a family will be a wonderful part of that."

Whether Prince Harry and Markle decide to have children soon after their wedding is totally up to them. But it seems pretty obvious that it's something they both want... one day.