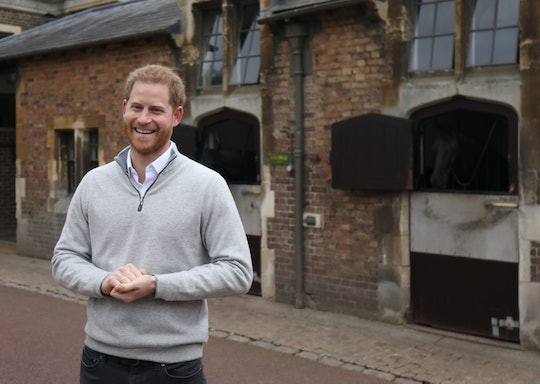 There's nothing quite like welcoming your first child. After all of those months of preparation and imagining what it would be like, it happens all at once; you're a parent. Suddenly, this tiny human who depends on you for literally everything has stolen your heart. Those first few days are spent soaking up everything about your newborn and getting used to your new normal. It's a special — and terrifyingly exhilarating — time, for sure. But apparently, Prince Harry is still traveling to the Netherlands just three days after the birth of baby Sussex.

As you've probably heard by now, the Duke and Duchess of Sussex welcomed their first child on Monday, May 6, according to NBC News. Meghan Markle delivered a baby boy, according to announcement on Instagram. "We are pleased to announce that Their Royal Highnesses The Duke and Duchess of Sussex welcomed their firstborn child in the early morning on May 6th, 2019. Their Royal Highnesses’ son weighs 7lbs. 3oz," the post read. "The Duchess and baby are both healthy and well, and the couple thank members of the public for their shared excitement and support during this very special time in their lives."

During the first interview since the arrival of his son, the Duke of Sussex noted that he and Markle had not yet decided on a name for their little guy. He also gushed about the strength of his wife. "It's been the most amazing experience I could have ever have possibly imagined. How any woman does what they do is beyond comprehension," Prince Harry told the press on Monday, according to Elle. "We're both absolutely thrilled and so grateful for all the love and support from everybody out there. It's been amazing."

According to People, the new father will be heading off on an airplane — four hours away from his wife and their newborn son — later this week. In fact, Prince Harry is scheduled to return to his royal duties already on Thursday. (Which seems a bit fast, considering his firstborn child came into the world on Monday, don't you think?) Prince Harry will be making a one-day visit to The Hague, according to the publication, where he will kick off a one-year countdown to the 2020 Invictus Games. Originally, that Harry was also slated to visit Amsterdam, but that portion of the trip has been postponed.

It's worth noting that it's not unprecedented for male members of the royal family to return to official duties quickly after the birth of a child. Prince William, for example, was back to the grind just two days after his and Kate Middleton's third child was born. And if you remember, the father of three had a difficult time staying awake during the Anzac Day ceremony, according to HuffPost. Check out the exhausted dad nodding off on the job in the video, below. (It's hands-down the most relatable thing he's done as a parent so far!)

If you ask me, Prince Harry should be allowed at least a week off from official appearances following the birth of his child. Those early days are better spent bonding with the baby, helping make sure the new mom is recovering well and resting, and generally getting used to his new normal. But alas, duty calls.

Hopefully, Harry is able to keep his eyes open better than his brother could two days after Prince Louis was born!