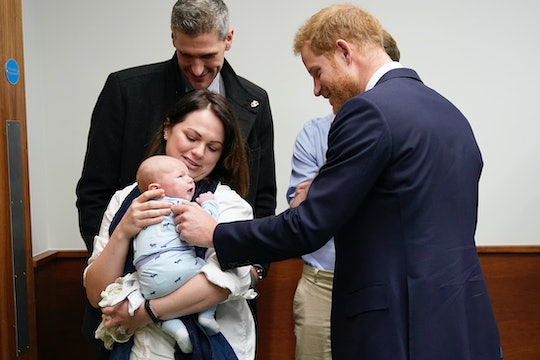 In just a few short weeks, Prince Harry will take on the new title of dad. Meghan Markle and her husband are no doubt in the nesting stage, awaiting the birth of their first child. And Prince Harry meeting a baby is the sweetest thing you'll see all day.

Harry caught up with old pal, former Marine, and new dad JJ Chalmers during a visit to the Institute of Translational Medicine and the Scar Free Foundation Centre for Conflict Wound Research based at Queen Elizabeth Hospital in Birmingham, according to People.

The center is the first ever of its kind and aids victims of terrorism (as well as veterans) as they deal with the physical and emotional effects of their experiences, as People reported.

Harry got to meet baby James, as well as his mama, but the little one seemed somewhat unsure why the royal dad-to-be was fawning over him, per PureWow.

"It’s your turn next!" Chalmers reportedly told Prince Harry, according to People. The baby stuck close to mom during the interaction, PopSugar noted, so he clearly wasn't fully aware of the enormity of his royal moment. (Though, really, can you blame him? He's just a little guy, after all.)

Visiting the center was part of Harry's commitment to support veterans and draw attention to the challenges they face once they return home, according to People.

While Markle has not formally said when she's due with her first child, she reportedly told a member of the crowd who came out to wish the royal couple well in Birkenhead that she's due in late April or early May, according to Town and Country.

That means that Prince Harry's child-free days are numbered. They're coming to a pretty quick end.

Kensington Palace announced the pregnancy back in October, posting on Twitter and Instagram, "Their Royal Highnesses The Duke and Duchess of Sussex are very pleased to announce that The Duchess of Sussex is expecting a baby in the Spring of 2019," alongside a photo of the two. "Their Royal Highnesses have appreciated all of the support they have received from people around the world since their wedding in May and are delighted to be able to share this happy news with the public."

Because there was only the very vague "Spring 2019" mention of a due date, there's been near-constant speculation over just when baby Sussex will arrive on the scene ever since.

Some assumed that she must have been three months pregnant at that time, because expecting parents often wait until the conclusion of their first trimester to announce their news. Others noticed that she stopped international travel at the end of February — all indicators of a spring birth, as Town and Country noted.

There's been no official announcement about the sex of the baby, although it's said that Harry wants a girl, Hello Magazine reported. While abroad in October, Harry supposedly told a fan that he would love to have a daughter. A fan shouted from the crowd, "I hope it's a girl!" And Harry reportedly replied, "So do I!"

And with the New York baby shower behind them both, there's only one thing left to wait for — the baby! It won't be long now, and royal fans should be getting answers to all their burning questions soon. Until then, here's wishing that Harry and Markle spend their last moments as a party of two in peace — or, maybe, meeting adorable babies.