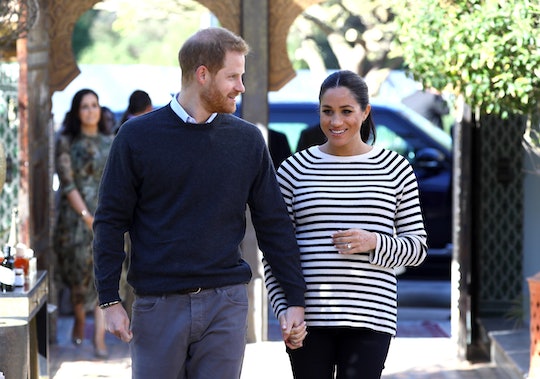 The royal baby hasn't even arrived yet and Meghan Markle and Prince Harry are already making grand plans for him or her. The Duke and Duchess of Sussex's son or daughter could be one of "the youngest royals to go on an official tour," according to The Sunday Times, and that's not even the best part. Prince Harry and Markle are reportedly taking a special trip for baby Sussex's first royal tour, and it's kind of a big deal.

Ahead of the former Suits actress' due date, she and Prince Harry have reportedly begun planning their next official tour, and they're considering bringing the baby along with them, as The Sunday Times reported. The couple is said to be headed somewhere very special to them: Africa. According to The Sunday Times, the trip will take place in the fall. A source told the outlet that Markle and Prince Harry "hope to take the baby with them but will make a decision nearer the time." The royal insider added that the Duke and Duchess of Sussex are weighing their options right now. The baby may join them for the full duration of the trip, or come along for parts of it.

"Potentially, Meghan and the baby could do some, if not all, of the trip," the source told The Sunday Times.

Per the outlet, the trip is planned for October. By that time, Baby Sussex will be about 6 months old. It's not uncommon for young royals to join their parents on royal tours, as noted by The Sunday Times. The outlet recalled that Prince George went on his first tour of Australia and New Zealand in 2014, at only 8 months old. Prince Harry and Markle haven't spoken publicly about the trip yet, however. CNN reported that Buckingham Palace did not deny that the trip is in the planning stages, but also wouldn't confirm any reports.

"Any official visits or tours undertaken by any members of the royal family are announced in the usual way," the palace noted, per CNN.

In a separate report from The Sunday Times, it was alleged that Markle, 37, and Prince Harry, 34, are considering moving to Africa for a short time after the royal baby is born. The couple would live there for two or three years, the newspaper said. According to the report, the Duke and Duchess of Sussex won't make a decision until 2020. The Daily Mail reported that the couple is planning a six-month trip to Africa, rather than a full move. So it seems as though things are still in flux, and with a baby on the way, that's pretty understandable.

Buckingham Palace would neither confirm nor deny The Times' reporting, saying, per Harper's Bazaar:

"No decisions have been taken about future roles."

Markle and Prince Harry have long been fans of Africa, specifically Botswana. As reported by the Observer, it's where they went on one of their first trips before announcing that they were engaged. Additionally, Prince Harry has called Botswana his "second home," the outlet noted. He even went as far as including a diamond from there for Markle's engagement ring.

Bringing Baby Sussex to Africa, which has such a special place in both their hearts, would be a wonderful experience for Markle and Prince Harry. Whether it's for a royal tour, or a personal trip, the couple will surely bring their child their one day and fans already can't wait. It's just one of the many exciting things they'll get to experience once the royal baby makes its way into the world.