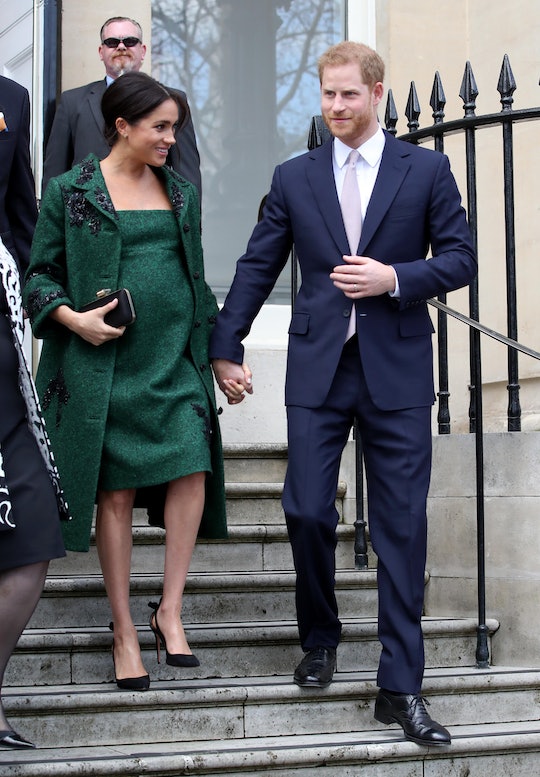 It didn't take very long at all, but Prince Harry and Meghan Markle, the Duke and Duchess of Sussex, have a new title to go with their already-decorated names. As of Tuesday, the expectant couple — whose names helped raise thousands for charity in a virtual "baby shower" for nonprofits the duchess is involved with — are now champs in a whole different contest. Prince Harry and Meghan Markle broke this social media record... and fans aren't surprised.

More Like This
Meghan Markle & Prince Harry Celebrated Archie’s 2nd Birthday With A Sweet New Photo
“He Is Hysterical”: 12 Of Meghan & Harry’s Cutest Quotes About Archie
Samira Wiley & Lauren Morelli Announced They Welcomed A Baby Girl
Prince William & Kate Middleton Had A Cute Moment While Revealing They're On YouTube

As Harper's Bazaar detailed, Harry and Meghan launched their very own official Instagram account on April 2. And it took fewer than six hours for them to get to 1 million followers, which is, understandably, considered a benchmark of social media success. More importantly, the magazine noted it is actually breaking the existing Guinness Book of World Records distinction for "fastest time to gain 1 million followers on Instagram." (Who knew that was even an official thing?)

Wow. So now the world-famous, do-gooding pair has another title to add to their collection: Guinness Book of World Records hall of famers. (Wouldn't something like, Lord and Lady of the Guinness Book of Hall of Fame make more sense? Or Ye Royal Record Breakers?)

According to the Guinness website, their new social media account, titled @sussexroyal, reached the 1 million mark in just 5 hours and 45 minutes. Since then, the account following has actually doubled, the company noted. (When I looked it up today, there are 3 million followers currently and growing.)

Guinness added that the royals have eclipsed former title holder Kang Daniel, a K-Pop star who made it to 1 million followers in 11 hours 36 minutes. (Before Daniel, Pope Francis was the boss, reaching 1 million in 12 hours back in 2016, the website noted.)

Of course, none of those previous Instagram influencers could claim quite the same situation as the Sussexes.

Markle, after all, had a healthy social media presence with her lifestyle blog, The Tig, before joining the Windsor clan.

That site, along with Markle's Instagram and Twitter accounts, was deleted as she prepared for her wedding, as Bustle reported. That, to me, makes her return to social media with an account that represents her as a duchess — and her husband and future child — more alluring.

Meanwhile, the official Twitter account for Kensington Palace that used to represent her and Harry alongside Prince William and Kate Middleton has officially become the solo venture of the Duke and Duchess of Cambridge, with the Cambridges tweeting out a welcome to social media to the Sussexes.

According to Vanity Fair, this is all part of Harry and Meghan's media strategy. The two wanted to be very involved with their social media, hiring a new press team and specifically choosing Instagram to share their passions with fans.

The pair apparently hand-picked the images that went along with their first post, the magazine detailed. There are no plans for a Sussex Twitter account, the publication noted, but you never know how social media and communications plans may change as time goes on.

This is all super-interesting, and also shows that the different royal households are building their own identities, much as they should.

Meghan and Harry plan to raise their child in the country, making their home in Windsor, Us Weekly reported, whereas William and Kate are based in London. And if you think Harry and Meghan have broken records already, just wait until their gorgeous baby graces the @sussexroyal feed.