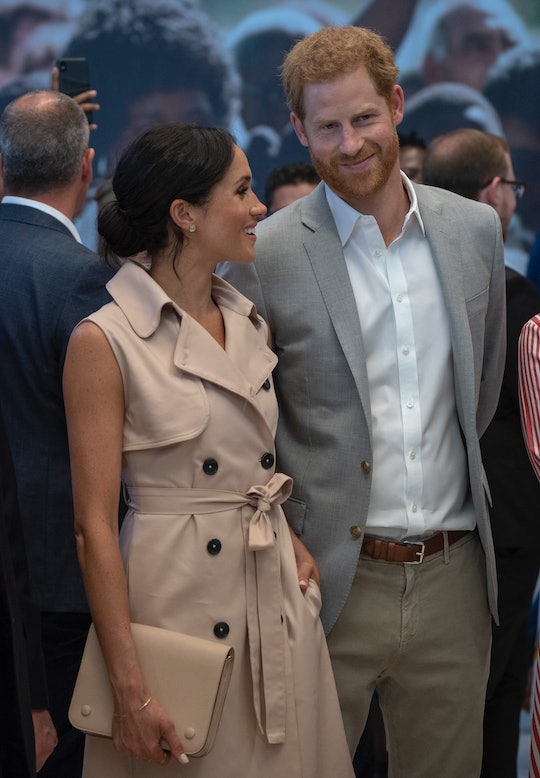 Prince Harry & Meghan Markle *Might* Be Visiting The U.S. Soon

News of a royal engagement is always exciting, and, honestly, no matter who Prince Harry had ended up marrying the relationship would've been a huge deal. But when Kensington Palace announced in 2017 that he was engaged to Meghan Markle — an American actress who grew up in Los Angeles — it meant that the British royal family would actually be welcoming one of our own. And now it sounds like the Duchess of Sussex might be coming home. According to Us Weekly, royal sources have claimed that Prince Harry and Meghan Markle might be visiting the U.S. soon on an official royal tour, so sound the alarm because this is not a drill.

While the trip has yet to be officially announced by the palace, sources told the magazine that the Duke and Duchess of Sussex are eyeing a trip to the United States in "the spring of 2019," adding that Meghan was "looking forward to introducing Harry to everything she loves about the U.S." But even without royal confirmation, it seems totally reasonable to expect that a stateside visit could definitely be in the cards: not only is it Meghan's home country, but overseas visits are a pretty standard part of royal life. In fact, the newlyweds already have one international trip in the books after they arrived in Ireland on July 10, according to BBC News.

But according to Us Weekly, the couple's trip to the United States would likely be more than just a visit to Meghan's homeland. The source notes that the royal couple would probably visit multiple cities, and that the goal would ultimately be "to solidify ties between the UK and the U.S.," with a particular focus on highlighting "CEOs and female tech entrepreneurs."

First though, the duke and duchess have another big trip planned: on June 10, Kensington Palace shared that Prince Harry and Meghan would be heading to Australia, Fiji, the Kingdom of Tonga, and New Zealand in October for an official tour, and that they would also be appearing at the 2018 Invictus Games in Sydney.

Their busy travel schedule isn't all that surprising, especially given that they've spent much of their relationship on the go. For one, prior to their engagement, Meghan actually lived in Toronto, Canada where she was filming Suits — she and Prince Harry even made their debut as a couple at the 2017 Invictus Games, which took place in the city — and early on in their relationship the couple secretly spent five days in Botswana "[camping] out with each other under the stars," according to Town & Country.

But they certainly won't be the first royal couple to spend their first year of marriage representing the monarchy abroad. Only a few months after their 2011 wedding, the Duke and Duchess of Cambridge travelled to Canada for eight days on their first overseas tour, according to The Guardian, and followed that visit with a three-day stop in Los Angeles, where Prince William took part in a polo match and where the couple attended a BAFTA reception for British actors and film-makers in Hollywood.

Prince William and Kate also embarked on a royal tour to Asia, spending time in Singapore and Malaysia for Queen Elizabeth II's Diamond Jubilee in 2012, according to People, and in 2014 the couple took their son, Prince George, to New Zealand and Australia. In 2016, Princess Charlotte even got in on the action: the royal couple returned to Canada for a week-long visit, this time with their children in tow, according to CBC News.

In other words, royal tours are just one of the expectations of working royals, and now that Meghan is a duchess they're part of her life, too. But although their United States visit will likely still be just as formal and official as every other trip they are expected to take as a duke and duchess, having the opportunity to return to the United States for a proper royal visit will probably feel pretty cool for Meghan. And when they do come? Chances are there will be plenty of people waiting to welcome her back.