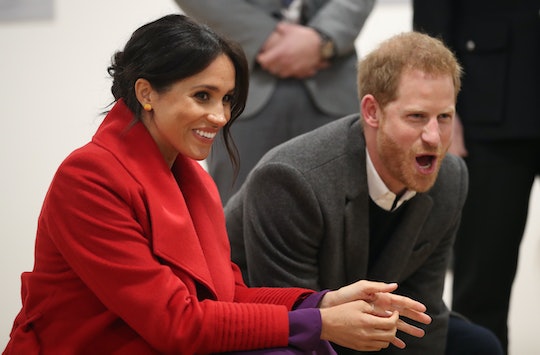 Prince Harry & Meghan Markle Won't Be Together On Valentine's Day, But Don't Panic

Since the days of Bridget Jones's Diary, single men and women everywhere have been embracing Valentine’s Day as a day to celebrate themselves and their friends. But for many couples, the day still holds a special significance, as a day set aside to revel in love and companionship. That’s why it might be surprising to hear about Prince Harry and Meghan Markle’s Valentine’s Day plans for their first year as a married couple.

There will be nothing necessarily magical or romantic about Feb. 14 for the Duke and Duchess of Sussex. On that day, the prince is being called away to fulfill one of his official duties, as the Captain General of the Royal Marines, according to People. In fact, it may be a decidedly unpleasant day for the dad-to-be as he’ll be visiting a regiment of the forces who are training more than 200 miles north of the Arctic Circle, according to Hello! Magazine.

On Monday, Kensington Palace broke the news on its Twitter account, revealing that the prince will be visiting Exercise Clockwork, celebrating the 50th anniversary of the training exercise in Bardufoss, Norway. The operation has trained over 16,000 Marine and Navy personnel since its inception, according to Kensington Palace. Prince Harry took over the Captain General role from Prince Philip in 2017, who had held the position for 64 years, the palace tweeted.

So that means Markle will spend the day away from her SO, something she’s spoken about in the past. In 2015, on the blog she used to have, The Tig, Markle wrote about taking time out for your favorite things whether you’re in a relationship or not, as Vanity Fair reported. “I think you need to cook that beautiful dinner even when it’s just you, wear your favorite outfit, buy yourself some flowers, and celebrate the self-love that often gets muddled when we focus on what we don’t have,” she wrote, according to Vanity Fair. In the post, she went on to discuss her plans for that year’s Valentine’s Day, which included running amok throughout New York and drinking "oddly pink" cocktails.

In 2017, after she started publicly dating Prince Harry, things were different. That year a source told Us Weekly that the couple had a low-key holiday at Kensington Palace. “Tonight, she and Harry are staying in for Valentine’s,” the insider told Us Weekly.

This isn’t the first time military duties have come between the royal couples and Valentine’s Day. For Kate Middleton’s first holiday as a married woman, she was also alone, as Prince William was off in Argentina on military training, according to PopSugar. Middleton spent the day performing official duties, visiting Alder Hey Children’s Hospital and an Action on Addiction project, the outlet reported.

Even when they are all together, it’s not just a day of chocolate hearts and snuggling on the couch. In 2014, both the princes spent the day helping out workers fighting a flood in Berkshire, according to ELLE, and Middleton spent that day at a high school where she is a patron, opening a new art room. In 2012, the queen and Prince Philip spent the day and evening at a reception and show to honor the work of Charles Dickens, as PopSugar reported.

Hopefully for this year, the newlyweds will carve out some time to celebrate in a way that is meaningful for them... before their royal baby comes along and everything changes all over again!