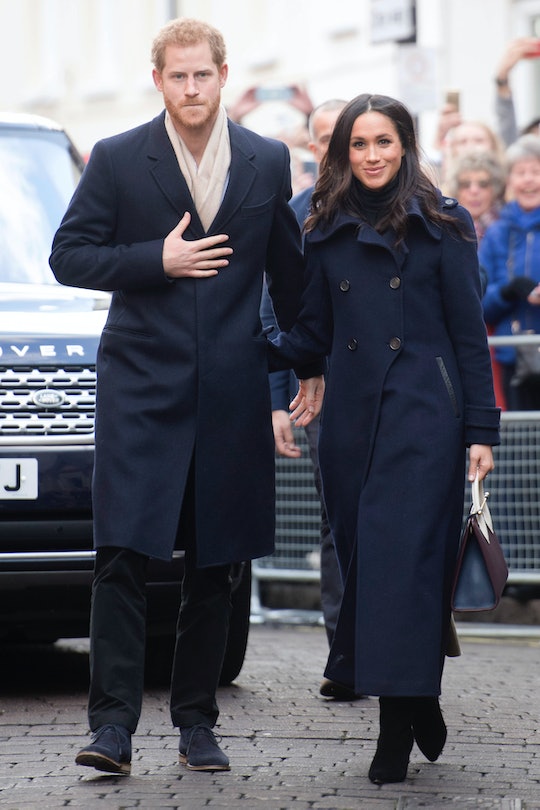 Prince Harry and Meghan Markle might not be taking a luxury honeymoon right after tying the knot, but it sounds like they will at least be upgrading to some seriously impressive new digs. The Daily Mail has reported that the couple will be moving into an apartment at Kensington Palace, but honestly, calling the couple's newly-renovated home an "apartment" has got to be the world's most hilarious understatement: Prince Harry and Meghan Markle's Kensington Palace apartment has 21 bedrooms, which, needless to say, is a pretty big upgrade from his current two-bedroom home.

Renovations reportedly began on Apartment 1 last November, in order to upgrade the royal residence into a suitable marital home for the soon-to-be-newlyweds, but it certainly isn't the first time that the palace has undergone a major reno for an important royal couple. Though the Duke and Duchess of Cambridge initially lived full-time in their Norfolk country estate, Amner Hall, they eventually moved into their current residence, Kensington Palace's Apartment 1A, following a $7.6 million renovation, according to Architectural Digest. But it's certainly not your average family home: according to Hello!, the 20-room, four-story, wing has three kitchens (one for the family, and two for household staff), five reception rooms, multiple bedroom suites with dressing rooms and bathrooms, and a nursery with an adjoining bedroom for their nanny.

Though it's not known exactly what Apartment 1 actually looks like, there is one rumored detail that seems particularly adorable. Not only is Apartment 1 located next to Apartment 1A, the two are actually thought to be connected by an adjoining door, according to The Daily Mail, so it sounds like Prince George, Princess Charlotte, and Prince Louis will have the opportunity to spend plenty of time with their uncle (and soon-to-be aunt) after the wedding.

To be fair though, they aren't exactly that far away to begin with: Prince Harry and Markle are currently living in Kensington Palace's Nottingham Cottage, which the prince moved into in 2013, according to Harper's Bazaar, after he moved out of Prince Charles' official residence, Clarence House. The cottage's previous tenants? The Duke and Duchess of Cambridge, who lived in the home as newlyweds, before moving into their (much larger) Norfolk home to start their family.

As hard as it is to believe that Kensington Palace is home to two adjoining apartments totaling a whopping 41 rooms, the grounds are actually currently home to a number of other members of the royal family, according to Business Insider. In addition to the Duke and Duchess of Cambridge and their children in Apartment 1A, and Prince Harry and Markle in Nottingham Cottage, Kensington Palace is also the residence of the Duke and Duchess of Kent, Prince and Princess Michael of Kent, and Princess Eugenie and her fiancé, Jack Brooksbank. The Duke and Duchess of Gloucester were the former tenants of Apartment 1 prior to the renovation (they vacated the space for the soon-to-be newlyweds, and will likely move into a smaller apartment at the palace), and while they don't actually live in Kensington Palace, Queen Elizabeth II and Prince Phillip are only two miles away, in their official residence, Buckingham Palace.

Though Prince Harry hasn't officially commented on his intention to leave Nottingham Cottage, it sounds like it has long been expected that Apartment 1 would eventually become his. In 2014, Princess Michael told Tatler that she expected the Duke and Duchess of Gloucester to leave their "enormous apartment" given that their children had moved out, according to The Daily Mail, and that she expected Prince Harry to move in to be beside his brother and sister-in-law — something she said would be a "very good move."

Though they haven't lived together in Nottingham Cottage long, moving out is likely to be bittersweet for Prince Harry and Markle, who actually got engaged in the house. Then again, they'll be moving into a newly-renovated 21-room wing of a royal palace — on second thought, they probably won't be too sad to say goodbye to their original home.