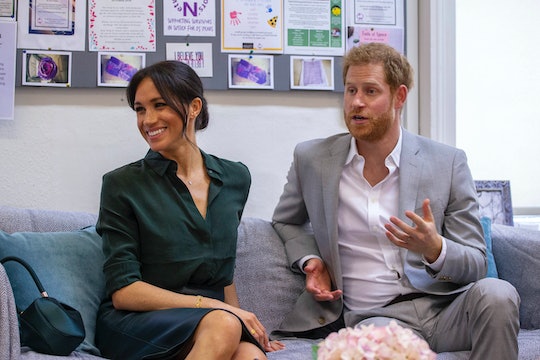 Before Prince Harry and Meghan Markle tied the knot in May, they often talked about their philanthropy plans for the future. Well, it looks like the newlyweds weren't kidding about bettering the world because Prince Harry and Meghan Markle's royal tour itinerary is all about activism. From meeting with conservation scientists to speaking with an organization that raises awareness about mental health issues, there's no doubt the couple want to make the most of their trip.

The Duchess and Duke of Sussex's trip to Australia was first announced in June, and people have been waiting for more details about it ever since. Luckily for the couple's curious fans, Kensington Palace released the full itinerary on Thursday, outlining everything (seriously, the thing is long) the two plan to do while down under.

Oh, and did I mention Prince Harry and Markle will also stop by New Zealand, Fiji, and the Kingdom of Tonga? What lucky ducks.

As for the trip's length, the Duke and Duchess of Sussex will visit "Australia, Fiji, the Kingdom of Tonga and New Zealand between Tuesday 16th and Wednesday 31st October," Kensington Palace's website states.

The press release went on to state about the trip:

There is a long history of friendship between The Royal Family and Australia, Fiji, Tonga and New Zealand, and their links with the UK are extensive. The Duke and Duchess are very much looking forward to experiencing the unique cultures and customs of these four Commonwealth countries, and have asked that this tour allow them opportunities to meet as many Australians, Fijians, Tongans and New Zealanders as possible. Together they look forward to building an enduring relationship with the people of the region.

Of course, Markle and Prince Harry have a lot of ground to cover while visiting these locales. The first stop will take place at the 2018 Invictus Games, an "international sporting event for injured servicemen and women," according to The Royal Foundation. The Duke of Sussex launched the event in 2014 after he was inspired by the Warrior Games in the United States, an annual event created to "enhance the recovery and rehabilitation of wounded, ill and injured service members and expose them to adaptive sports," according to Department of Defense Warrior Games.

Next up is a trip to the Taronga Zoo, where the newlyweds will open the new Taronga Institute of Science and Learning, according to the Daily Mail. But before you assume this stop is nothing more than ribbon cutting ceremony, note that Markle and Prince Harry will also speak with "female conservation scientists who are working on efforts to reduce illegal wildlife trafficking," according to The Mirror.

After the zoo, the two will enjoy "a rehearsal of Spirit 2018 by the Bangarra Dance Theatre, an internationally acclaimed Aboriginal and Torres Strait Islander modern dance company," according to the Daily Mail.

The following day for the couple is also jam-packed with activities. Although there is a lot to note in the schedule, I think their visit to "a local school working to improve the education outcomes of young Aboriginal and Torres Strait Islanders," according to Kensington Palace's website, is particularly interesting. While there, Markle and Prince Harry will get to witness how sports play a vital role in student learning.

A common theme in the trip centers around helping young people succeed in life. For instance, the Duke and Duchess of Sussex will travel to a "social enterprise café which offers leadership, mentoring and training programmes for young Aboriginal people," according to The Mirror.

Additionally, Markle and Prince Harry "will meet a local surfing community group, known as OneWave, raising awareness for mental health and wellbeing in a fun and engaging way," according to Kensington Palace's website.

Another important area of focus? Environmentalism. The Duke and Duchess of Sussex will visit local beaches to learn about efforts "to reduce the negative impact on the marine environment," and they'll also dedicate two forest reserves while in the Kingdom of Tonga, according to Kensington Palace's website.

Obviously, the tour will involve many more stops in addition to the ones I've already mentioned. In fact, Markle and Prince Harry's itinerary includes a whopping 76 engagements, according to the Daily Express.

Although I'm sure the couple will be tired by the end of their trip, I bet they don't mind the hectic schedule given the importance of these engagements. The Duke and Duchess of Sussex are committed to activism, after all.