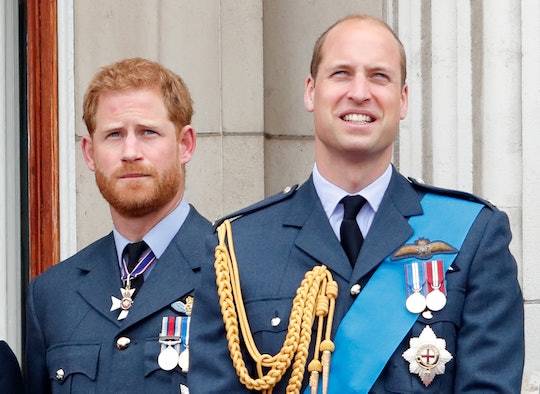 Ever since Prince Harry and Meghan Markle announced they would be taking a "step back" from their roles as senior members of the royal family, media coverage of them has exploded, even more so than usual. Headlines seem to be flying left and right about the reported turmoil between Duke of Cambridge and the Duke of Sussex. However, Prince Harry and Prince William have slammed a report about their relationship in a recent joint statement.

The Times of London, a U.K. newspaper, recently reported that a rift between Prince William and Prince Harry was caused by the elder brother's "bullying attitude." Additionally, the quoted source claimed Prince Harry and Markle were stepping away from their royal duties after "constantly being told their place." It seems the use of one word in particular — "bullying" — is what prompted the royal brothers to respond with a joint statement. It's rare move, considering how much gossip is published about their family on a regular basis.

"Despite clear denials, a false story ran in a U.K. newspaper today speculating about the relationship between The Duke of Sussex and The Duke of Cambridge,” the statement, which was obtained by People, reads. “For brothers who care so deeply about the issues surrounding mental health, the use of inflammatory language in this way is offensive and potentially harmful."

Indeed, earlier this month, Prince William announced an expansion of the Head's Up: Football Unites for Mental Health program, which has a goal of encouraging more people — men in particular — "to feel as comfortable talking about mental health as they do football." And Prince Harry teamed up with Ed Sheeran for a Mental Health Day PSA back in October, among other ongoing efforts to promote mental health.

Although Prince William has not yet publicly reacted to "Megexit," the Jan. 8 announcement by Prince Harry and Markle reportedly caught the royal family off-guard, according to The New York Times. So much so, that Queen Elizabeth issued a statement in response to the news.

"Discussions with the Duke and Duchess of Sussex are at an early stage. We understand their desire to take a different approach, but these are complicated issues that will take time to work through," Buckingham Palace wrote in a statement issued to reporters the same day as the bombshell announcement.

In an effort to figure out the next steps, Queen Elizabeth, Prince Charles, Prince William, and Prince Harry met at Sandringham Estate on Monday, Jan. 13 to have a discussion, USA Today reported. It was unknown whether Markle — who is currently in Canada — joined the conversation via phone.

"My family and I are entirely supportive of Harry and Meghan’s desire to create a new life as a young family," Queen Elizabeth said in a statement following the summit on Monday. "Although we would have preferred them to remain full-time working Members of the Royal Family, we respect and understand their wish to live a more independent life as a family while remaining a valued part of my family."

Regardless of what ultimately led Prince Harry and Markle to take a step back from their roles in the royal family, one thing's for sure: it seems there was no "bullying" of any kind involved. And the royal brothers have no problem shutting down the tabloids that suggest otherwise.

More Like This
Queen Elizabeth II's Most Romantic Quotes About Prince Philip
Queen Elizabeth's Corgis Will Be "Spoiled Rotten," According To Prince William
Prince William Says Walking In The Queen's Procession Reminded Him Of His Mom's Funeral
Prince Harry Mentions The First Time His "Granny" Met Archie & Lilibet In Lovely Tribute