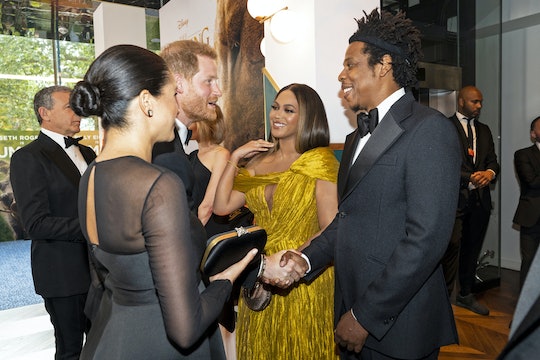 Sometimes the best part about the red carpet isn't the event itself, but the little celeb conversations caught on the fly. Case in point: At the big European premiere of Disney's The Lion King in London over the weekend, Prince Harry revealed Archie's latest milestone during a conversation with fellow parents Beyonce and JAY-Z, and the moment was perfect on so many levels.

As Hello! magazine noted, the Duke and Duchess of Sussex grabbed the opportunity Sunday to attend the star-studded event, which meant a date night away from their 2-month-old baby, who was probably snoozing away at the couple's Frogmore Cottage residence in Windsor. And while Archie was doing what babies do best, Markle and Prince Harry were enjoying the glitzy event, which was attended by notables such as Elton John, Seth Rogen and Pharrell Williams, according to People.

With a cool crowd like that, you'd think Prince Harry and Markle would have taken the opportunity to really cut loose and talk about something other than their parenting. But like any doting new parents might, the two spent the evening chatting about their child.

The topic came up when the couple caught up with Lion King star Beyoncé and her husband, JAY-Z. Instead of chatting about the perks of being rich and famous, the fab foursome discussed parenting, according to Page Six. Specifically, Prince Harry revealed that Archie is holding his own head up, which us moms and dads know is a big milestone for a baby as they head out of the so-called "fourth trimester."

Beyoncé appeared excited to hear that little Archie is supporting his own neck, according to Hello! And Harry also revealed to the star — who voices Nala in the live-action version — that Archie is "not so little anymore," according to Us Weekly. Awww.

Time sure flies doesn't it? It might be hard to believe, but two months have passed since the little guy made his debut on May 6. And most recently, Archie hit another milestone when he was christened on July 6.

Through the Duke and Duchess of Sussex's conversation with Beyoncé and JAY-Z, it's clear they're doing something right in the parenting department. Not only does it sound like the Archie is thriving, but I think it's awesome that and mom and dad are socializing with other parents because it's always beneficial to share tips. JAY-Z, for instance, gave Markle and Prince Harry a helpful tip gleaned from his own experiences raising Blue Ivy, 7, and twins Rumi and Sir, 2. "The best advice I can give you, always find time for yourself," the music entrepreneur said, according to Vanity Fair, adding that he and Beyoncé don't take the children along on every single trip.

Ace advice, right? It's important to make time for your relationship, especially when you're a new parent.

I don't know about you guys, but I hope these families sync up for a playdate ASAP. It's obvious the parents get along, and I bet the Duke and Duchess of Sussex could learn a lot from Beyoncé and JAY-Z.