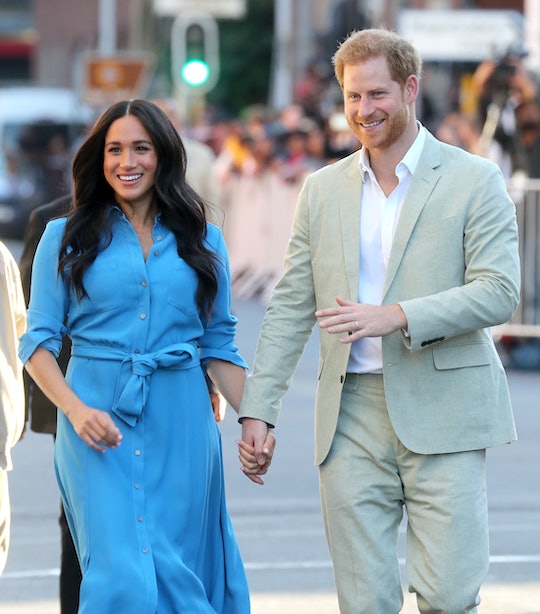 The Duke and Duchess of Sussex have officially kicked off their stint in Africa, taking their young son on his first royal tour. The little one is getting his first taste of what will likely be a childhood filled with international experiences, so it's a good thing the youngest Windsor is up for adventure. In fact, Prince Harry's Baby Archie update reveals the young royal is already a fan of his jet-setting life.

Prince Harry and Meghan Markle's first child, Archie Harrison Mountbatten-Windsor, has come along for the ride on their tour of South Africa, as People reported. Harry and Meghan's 10-day trip will include Malawi, Angola, and Botswana, although the youngest member of the family isn't expected to travel to all of those additional countries, according to Harper's Bazaar.

In the meantime, however, we have new info from royals correspondent Emily Andrews regarding 4-month-old Archie's reaction to his new surroundings so far. It's fun to get some insight into the baby's developing personality, and it looks like Archie inherited his parents' love of new sights, sounds, and cultures.

“He was staring out the window as we flew in... looking at Table Mountain," Harry told locals regarding their plane's descent into the South African city of Cape Town, one of the republic's three capitals, according to The Mirror. Table Mountain is a local landmark and surely would be eye-catching for a tyke who's getting interested in the world around him.

Of course, Master Archie, as he will formally be called in the absence of a "Prince" title, isn't just any baby hitting his 4-to-6-month milestones, which is when a child starts getting seriously interested in people and things (like mountains) around them, according to the Mayo Clinic. No, this kid is seventh in line to the throne of England, not to mention to offspring of Princess Diana's youngest and a famous actor. So people are going to be interested in Archie's life no matter what he's doing.

As People added, Harry and Meghan have already fielded questions about the baby, who did not appear in public when the pair toured the District Six Museum, a site where visitors can learn about how "non-white residents of District Six" were evicted and relocated further outside the city during the region's Apartheid era of racial discrimination, according to Atlas Obscura.

Somaya Ebrahim, 81, a former District Six resident who was present when the Queen visited in 1947, chatted with the royals, asking after Archie, the magazine noted. “He’s sleeping," Harry explained, adding the flight had taken it out of the little one. “He’s not grouchy, just exhausted,” the new dad reportedly said, according to People.

Not that the couple would have it any other way, I'm sure. They weren't going to leave a small baby at home when they had the choice to bring him along (not that there would have been anything wrong with that). Plus, I can't imagine little Archie would want to miss out on this exciting trip, even if he might not remember it later. His parents have important meetings planned, after all, including a meeting for Prince Harry with Archbishop Desmond Tutu and his wife regarding illegal wildlife trade in Malawi, according to The Sun.

Meanwhile, Meghan reportedly has meetings scheduled with groups promoting women's education, health, entrepreneurship, and leadership, according to The Sun.

It sounds like it's going to be a fascinating trip for the Sussex clan, to say the least. And I can't wait to follow the developments of this Africa tour, all the way from a potential appearance from Archie to his parents' comments on the continent's social and economic progress. Stay tuned!