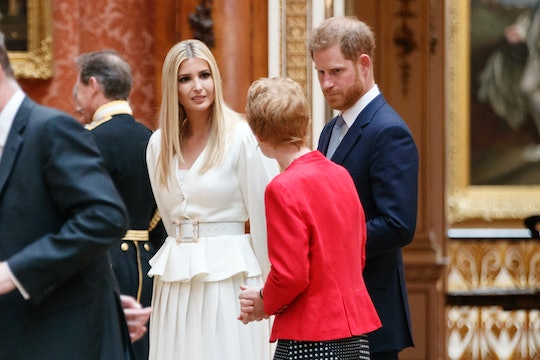 President Donald Trump visited the United Kingdom on June 3 for an official state visit, meeting with members of the royal family, including the Duke of Sussex, on his first day across the pond. And as one might imagine, Prince Harry's expression during Trump's visit seemingly wasn't one of unbridled excitement. In fact, many people on Twitter couldn't help but notice that the new dad and husband of Meghan Markle appears completely unamused with the POTUS.

Before Trump landed in the U.K., he made an offensive comment about the Duchess of Sussex during an interview with The Sun. When asked about past criticisms Markle had made about him, Trump responded: “I didn’t know that. What can I say? I didn’t know that she was nasty.” Ugh.

Of course, Trump denied ever saying the remark, despite the existence of an audio recording. "I never called Meghan Markle “nasty.” Made up by the Fake News Media, and they got caught cold!" Trump tweeted Sunday. "Will @CNN, @nytimes and others apologize? Doubt it!"

Shortly after this fiasco, Prince Harry accompanied Trump and First Lady Melania Trump on a tour at Buckingham Palace, where the group looked at "the Royal Collection exhibition of items linking the British monarchy and the American presidency," according to HuffPost.

The Duke of Sussex, who has yet to comment publicly about what Trump said about Markle, looked less than enthused as he toured the exhibit alongside America's 45th president. In one particular shot, his expression appears distant, as if he's staring off into the void. If America had a face, this would be it, folks.

For those who have been over Trump's presidency since the jump, Prince Harry's expression hit home in more ways than one.

"This is Prince Harry's face at the Buckingham Palace Trump meet and greet and a royal hasn't been this relatable since Princess Diana fangirled over John Travolta," one person joked on Twitter.

Another person commented, "That's right Harry, that's the look most of us have."

Someone else commended the Duke of Sussex for his restraint, writing, "Harry just proves he was a class act! What and excellent ambassador for his country."

Emily Andrews, a royal Correspondent for The Sun, provided more insight into the meeting, noting that Prince Harry "hung back" during most of the tour.

"Prince Harry, who was also at the private lunch, noticeably hung back," she wrote. "He walked in with Ivanka (was he supposed to show her round the exhibition?? Or maybe they sat next to each other at lunch) and then drifted off to talk to the Lord Chamberlain (the Earl Peel)."

Someone wrote in response to Andrews' tweet: "Looks like prince harry is waiting by the door for a quick escape at the earliest possible moment."

Jokes aside, it's impossible to know what Prince Harry really thinks unless he releases a statement. But given Trump's frosty relationship with the royals, including Markle, there's a good chance the Duke of Sussex won't cozy up to the president anytime soon.