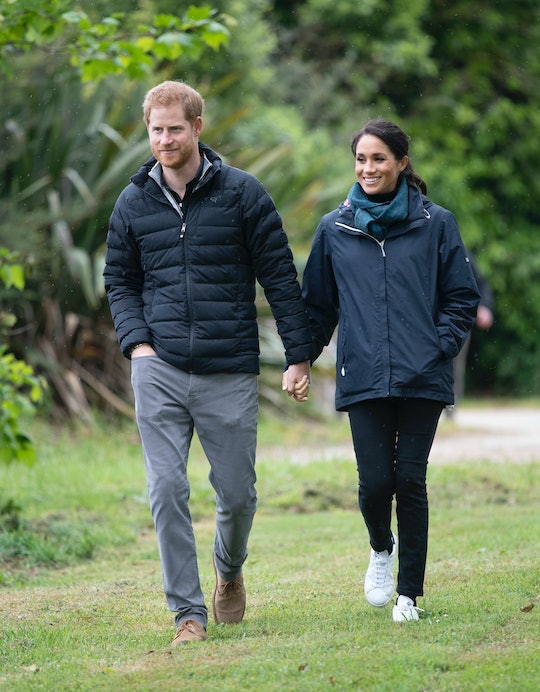 Could it be that people will start seeing a little more behind the curtain of royal life? Just a few days after one of Meghan Markle’s photos was posted to the Kensington Royal Instagram account, Prince Harry shared his first photo to Instagram today. The image was a glimpse into the whirlwind trip to Australia, New Zealand, Fiji, and Tonga, the couple have been on for the past few weeks.

The photo showed up on the Instagram story for Kensington Royal — the account that the Duke and Duchess of Sussex share with the Duke and Duchess of Cambridge — tucked alongside photos of meetings with mental health workers and greeting children at a school. An aerial photos of a lake surrounded by green hills was captioned “Traveling to the beautiful Abel Tasman National Park #ROYALVISITNZ” and a photo credit was given to the Duke of Sussex.

The next photo in the story explains a bit about what they couple are doing at the national park, showing them walking along a beach with a ranger. It’s captioned “learning about local conservation projects with @docgovtnz ranger Andrew Lamason”. They look right at home in the gray, overcast weather, snuggled up arm in arm under an umbrella.

The couple’s trip coincided with The Invictus Games in Sydney and a few days ago Markle shared a behind the scenes moment of Harry practicing his speech for the night’s closing ceremony. The black-and-white snap is an audience-view image of Harry walking across the stage with the microphone in hand.

According to a schedule posted by royal expert Emily Nash, they’ve spent quite a bit of time in Sydney over the two-week trip, but have also visited Dubbo, Melbourne, and the Fraser Islands, along with Fiji and Tonga. While in New Zealand they started in Wellington before heading to Abel Tasman Park, and followed up with visits to Auckland and Rotorua.

“The programme across these four Commonwealth countries will focus on youth leadership, and environmental and conservation efforts, including the dedication of several new @QueensCanopy projects," an official statement from Kensington Palace said, according to Town & Country. "The Tour will also focus on the recovery and rehabilitation of servicemen and women through @InvictusSydney 2018. #IG2018"

Of course there was also a little bit of news to be shared; the palace announced the couple’s pregnancy on the first day of their tour through Australia, nearly breaking the internet. On Oct. 29, Prince Harry made the most adorable comment on the baby when they arrived in New Zealand. “From myself, my wife, and our little bump, we are so grateful to be here,” Harry told a crowd of locals, according to US Weekly.

The new baby is already causing a bit of a shakeup around the palace grounds back in England. Hello! reported that the Prince Harry and Prince William, who have long shared neighboring residences, will be putting some space between them. Roya Nikkah, a royal correspondent, told The Sunday Times “The Sussexes are expected to leave their two-bedroom home at Nottingham Cottage, in the grounds of Kensington Palace, and may choose to move into the main palace or find a new royal residence."

And though it’s hard to imagine any future king updating his Facebook status, if the royals start to get into the social media game, fans will still be able to enjoy all the sweet moments of their lives.