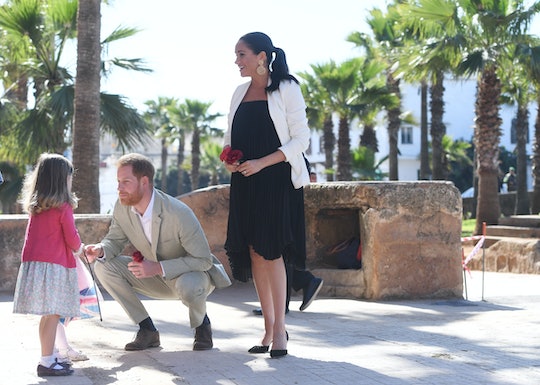 The Duke and Duchess of Sussex wrapped up their royal tour of Morocco on Monday, after spending several days meeting with locals and fans. Throughout the trip, the couple was greeted with various gifts, most of which were for the expectant mother, something that's starting to get to a certain dad-to-be. In fact, Prince Harry's reaction to Meghan Markle getting flowers from two adorable little girls was predictably cheeky, but the whole interaction was incredibly sweet.

In a video obtained by Sky News, Prince Harry and his wife, seen cradling her burgeoning pregnancy bump, approached two eager fans wielding flowers and a British flag. Upon reaching the children, the expectant mom was gifted a red rose from each girl. But after hearing this, 34-year-old Prince Harry jokingly groaned, "ahhh she gets all the flowers." Don't worry, guys, one of the girls hands him a flower of his own.

The Duke of Sussex was clearly moved by the gesture, letting out a big "awww." He then crouched down to their level to thank them, and speak with them a bit. In the video, Prince Harry can be heard asking them their names while 37-year-old Markle chatted with adult fans standing nearby.

This is just one of many cute moments Prince Harry and Markle shared with the adoring public in Morocco. During a separate portion of their trip, Express reported that Markle — pregnant with her first child, due this spring — raced ahead of Prince Harry to chat with two girls, aged 5 and 2, who were seen waiting patiently for the former Suits star in a small town in Morocco.

The little girls, half-British and half-Moroccan, wore matching red dresses, which Prince Harry made sure to compliment them on while speaking with them, as PopSugar reported. Markle, meanwhile, allowed the pair to check out the henna tattoo she got on her hand to celebrate her pregnancy, according to Vanity Fair.

"Nice, isn't it? So pretty!" she said during their talk, according to Express.

While they engaged with as many fans as possible, there were some requests they simply couldn't accommodate — like one young boy who asked for a selfie with Markle, according to Marie Claire. The fan admitted he had a crush on the former actress, before shooting his shot at getting a picture with her, as Marie Claire reported.

Sadly, Markle had to decline due to royal protocol, but was polite about it and even gave the boy a kind rub on the shoulder. The entire encounter was captured on video, shared by Daily Mail correspondent Rebecca English.

Prince Harry has a history of adorable interactions with fans. Take, for example, the time he jokingly told off a 3-year-old Irish boy who couldn't stop touching Markle's hair. The Duke of Sussex met the boy during a joint trip to Ireland with Markle, according to People, photos from the encounter showed Prince Harry pretending to wag a finger at the boy, who couldn't keep his hands of the Duchess.

In another sweet moment during the same trip in October, Prince Harry let a 4-year-old boy tug at his beard, according to ELLE. He jokingly grimaced during the whole thing, but it was all in good fun.