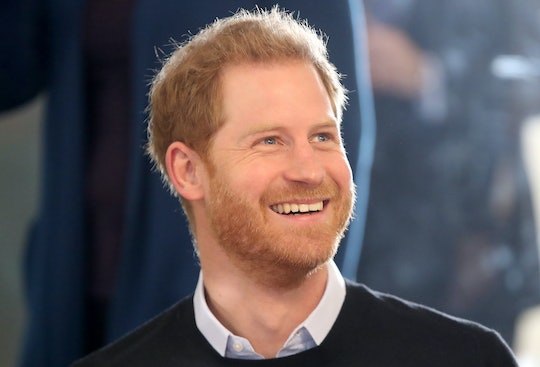 Shortly after the arrival Baby Sussex on Monday, May 6, Prince Harry shared his reaction to Meghan Markle giving birth. Speaking with reporters, the Duke of Sussex seemed overjoyed and ecstatic about the arrival of his son, stating at one point, according to a video captured by Sky News: "It's been the most amazing experience."

In the short, the clip will make you feel all of the feelings, trust me...

Before baby Sussex's arrival, the Duke and Duchess of Sussex made it a point to tell the public that Markle wouldn't pose for photos immediately post-birth. "Meghan Markle does not want the pressure of having to pose on the steps for cameras so soon after childbirth," a supposed source told Entertainment Tonight at the time.

Although Markle made the choice to avoid the cameras (which is her right, of course) Prince Harry decided to address the public following the announcement of their child's arrival.

Clad in a simple zip up sweater, Prince Harry gave a seemingly impromptu interview to reporters in front of a horse stable. Talk about a scenic shot.

The Duke of Sussex started off the conversation by noting that his wife and son were both doing "incredibly well," according to ABC News. A grinning Prince Harry then pivoted to complimenting Markle, stating, according to Elle: "It’s been the most amazing experience I could ever possibly imagine. How any woman does what they do is beyond comprehension I'm so incredibly proud of my wife."

Aww. Monday is already off to a very emotional start — the joy and love here are overwhelming.

As one might imagine, people are so happy for Markle and Prince Harry's baby news.

"Got goosebumps with that," one supporter commented on the video. "The fierce love he has is so evident. And the fierce love and pride he has with Meghan. Today is a great day!!!"

"What a lovely announcement Prince Harry made," someone else said. "The video of him beaming is precious. All fathers deserve that moment of joy and pride. Congrats."

Another person commented: "Awww lovely speech by Harry, great to hear good news for a change! Many congratulations to family Sussex, precious moments for all new parents."

Moving on from all of the excitement, Prince Harry also addressed the topic of his little one's name.

"The baby’s little bit overdue so we’ve had some time to think about it, but that’s the next bit, we’ll being seeing you guys in about two days time as planned as a family to be able to share it with you guys so everyone can see the baby," he told the crowd, according to Town & Country.

Yep, it sounds like the Duke and Duchess of Sussex have something special planned for their supporters. Maybe they'll release a public photo shoot, or perhaps the trio will pose for photographers outside of their home. Either way, I have a feeling people can't wait to learn more about baby Sussex.

In the meantime, fans can enjoy Prince Harry's adorable reaction to Markle giving birth. It's all too cute.