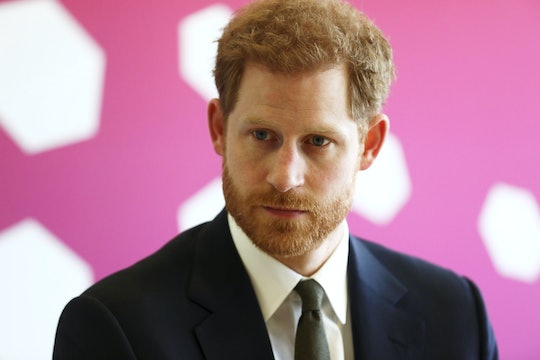 Mondays aren't usually a cause of celebration, but when it comes to the royal family, they certainly have a reason to jump for joy (not that they would since it's not very dignified). That's because the Duchess of Cambridge, Kate Middleton just gave birth to a baby boy, which has not only given Queen Elizabeth II a new grandchild, it's also made Prince Harry an uncle again just a few weeks before his wedding. That's enough to make anyone wonder what Prince Harry's response is to Kate Middleton giving birth since he now has yet another adorable nephew to play with in the weeks and years to come.

Of course, everyone knew the royal birth was imminent, though I'm sure Prince Harry is pleased his sister-in-law didn't go into labor on the day of his wedding to Meghan Markle. (Granted, it wouldn't have been her fault in any way, but talk about potentially stealling somebody's thunder!) But thankfully, that's not something anyone has to worry about anymore. The Duchess of Cambridge delivered her son safely into the world at St. Mary’s Hospital in London around 6 a.m. ET, according to TIME. Meanwhile, Kensington Palace released a statement shortly afterward, assuring the public that both mother and child were happy and healthy.

So what does Prince Harry think of all of this excitement? Although Kensington Palace did share on Twitter on Monday morning that Prince Harry has been informed about his nephew's birth and is "delighted with the news," Prince William's brother has yet to make a formal statement about the birth. However, I'm sure it's only a matter of time until he does so.

It's not difficult to guess how he's feeling, though. As an already proud uncle to both Prince George and Princess Charlotte, I think it's safe to assume that he's beyond thrilled to have another little one to spoil around the palace. (I assume they just all hang out all the time at the palace playing hide and seek, right?)

Odds are, he could be on his way to the hospital right now to see his new nephew or hanging out with George or Charlotte for the time being. Either way, it's totally understandable why he hasn't found time to make a formal statement to the press. He will, though, don't you worry and it'll only prove just how great of an uncle he is, trust me on that one.

In the meantime, there's still a lot to learn about this new royal baby. For starters, we have yet to find out his name. Twitter is, as per usual, having a great time trying to guess what it could be — along with creating some pretty epic memes. But until more information gets released, that's all anyone has to go on for now. A photo of the child has yet to be released as well, though if the past is any indication, Kate Middleton and Prince William will likely pose for photos with the newborn at some point at the hospital's private Lindo Wing, just like they did when Prince George and Princess Charlotte came into the world.

Kate Middleton's pregnancy was initially announced back in September 2017. “The Duke and Duchess of Cambridge are very pleased to announce that The Duchess of Cambridge is expecting their third child," the palace posted on social media. And now that the child is finally here, I'm sure everyone in the family — including Prince Harry — is anxious to get to know the little one. Congratulations to the royal family!