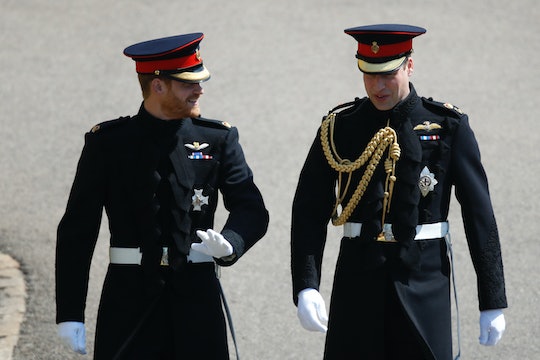 Sure, most eyes were on the beautiful bride, Meghan Markle, at the royal wedding but that doesn't mean the groom, Prince Harry, went unnoticed. His dashing good looks and charming personality were on full display today, and can we just talk about that military uniform for a second? The distinguished Army Captain, who served two tours in Afghanistan, wore a dashing dark navy uniform. But how does Prince Henry's wedding suit compare to Prince William's suit that he wore on the day of his wedding? The two royal brothers both looked dapper on their respective big days, but there were some differences, for very formal reasons.

Both Prince Harry and Prince William, Duke of Cambridge, wore official uniforms to both ceremonies, and later changed into tuxedos for the reception parties. Prince Harry's handsome suit is the frockcoat uniform of the Blues and Royals, the unit he served with in Iraq, reported Esquire. The single-breasted uniform is made of blue doeskin, according to Time.

Also according to Time, this uniform has a white buckskin belt with sword slings, though Harry didn't bring his sword to get married! As you can see in the photos, Prince Harry's best man, his brother Prince William, iwore the same uniform, though his was "topped off with elaborate gold braiding from the Regimental pattern and the Garter Star," reported Time.

William, who served as a Lieutenant in the Royal Air Force (RAF), surprised many when he eschewed Air Force attire in favor of donning the official red tunic of the Irish Guards at his wedding to now Duchess of Cambridge, Kate Middleton. William holds the honorary rank of Colonel of the Irish Guards, and "perhaps preferred its dashing scarlet color to the more subtle blue [of the RAF uniform]," reported Time. Though the Gentleman's Gazette explained that William chose this outfit because "it is his uniform with the highest rank." The red tunic certainly did pop during his regal 2011 wedding ceremony.

While Harry wore the frock coat uniform and William wore the tunic of the Irish Guard, they both shared one thing in common: impressive military bling.

Prince William may have opted to don the Guard's Red, but he still paid tribute to the Royal Air Force. "[He] decided to display the famous wings of the RAF on his light blue Garter Sash as well as the Garter Star and the Golden Jubilee Medal," explained the Gentleman's Gazette. And while he did not walk into his wedding ceremony donning a sword, his waist belt could've accommodated it if he chose to go that route.

Interestingly, when Prince Harry attended his brother's wedding to Kate Middleton, as Joseph Waving, military manager at Savile Row tailor Gieves & Hawkes told WWD, he wore the Blues and Royals uniform. That, explains Waving, is the "the ceremony uniform (rather than) day-to-day uniform that they wear while serving.”

Both brothers looked incredibly handsome in their official uniforms. Hopefully, they'll be able to get a little more comfortable for the reception that later follows the ceremony.