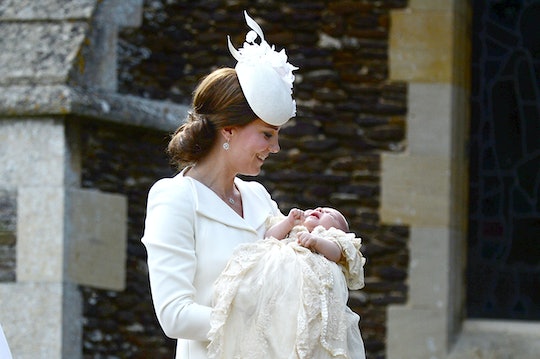 The next few months are going to be big for the royal family. While many will be speculating about what Meghan Markle's wedding dress will look like at her May 19 nuptials, others are excited to see another special — albeit much smaller — outfit. In fact, Prince Louis' christening outfit is full of royal history, and the traditions behind the 177-year-old dress are pretty amazing.

For his upcoming christening, as The Sun reported, Prince Louis will most likely wear the same gown that 62 of his ancestors also wore as babies. Prince George and Princess Charlotte were baptized in it — technically — though they actually wore a replica that was made in 2004, according to The Sun.

As for when the royal christening will be held, it will probably be within the next few months (though you can probably safely cross the week of May 19 off the calendar, for reasons that should be obvious). People reported that given Prince George was baptized three months after he was born, and Princess Charlotte was baptized about two months after she was born, sometime in June or July will most likely be the date for Prince Louis' christening.

Prince George's was held at the Chapel Royal in London's St. James' Palace, while Princess Charlotte's was held at the St. Mary Magdalene Church in Norfolk, where Princess Diana was also baptized, ABC News reported. It remains to be seen whether they will select a new location for Prince Louis, or return to one of the two churches.

As with anything when it comes to the royals, there are a lot of family traditions that happen at christenings. The Telegraph reported that royal babies are baptized in The Lily Font (a bowl that has been used by the royal family since 1841, the same year Queen Victoria commissioned the design of the dress that's still used today). The publication also noted that the priest uses water from the Jordan River (paying homage to how John baptized Jesus in the bible).

As for the gown itself, Queen Victoria had it styled after her wedding dress, and The Sun reported that she described it as: "A white Honiton point lace robe and mantle over white satin." Everyone including the queen, Prince Charles and Prince William were baptized in it, until Angela Kelly, senior dresser to the queen, "deemed it too fragile" to be used anymore, according to The Sun. Prior to the replica being made, it was hand-washed with spring water and stored in a dark room to maintain its quality.

Kate Middleton gave birth to her third child, a son, at 11:01 a.m. local time on April 23, weighing in at 8 pounds, 7 ounces. A few hours after delivery, Prince William and Middleton stepped outside the Lindo Wing of St. Mary's Hospital to introduce their son to the world, as is customary. Town & Country reported that media from around the world had been setting up outside the hospital weeks before the Duchess of Cambridge gave birth, in anticipation of the moment.

On April 27, the palace announced that the baby's name: Prince Louis Arthur Charles. Town & Country explained the significance of the royal baby name, saying that Louis (which means "famous warrior") paid tribute to Prince Philip's uncle and Prince Charles' mentor, the late Lord Louis Mountbatten. Arthur is also the name of Henry VII's son, Arthur Tudor, Prince of Wales, and Victoria's seventh son, Prince Arthur (it was also one of Prince Charles' middle names and one of George VI's names). Finally, Charles is most likely a nod to the baby's grandfather, Prince Charles.

Just as the world had to wait a week or so to learn the baby's name, it's likely that information regarding the christening won't be made public for a while. However, there's plenty to anticipate between the long-held traditions, beautiful clothing, and of course, the super adorable royal kids.