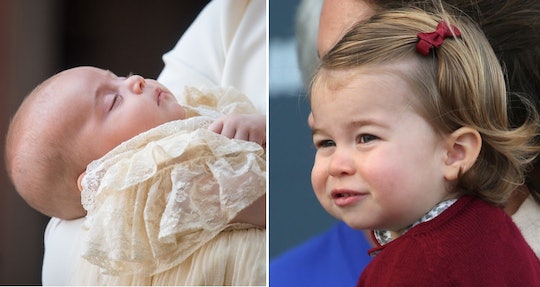 The royal family's genes are strong. No one can deny that the youngest generation of royals — Prince George, Princess Charlotte, and little Prince Louis — resembles so many of their famous relatives in their own ways. But how closely do the royal siblings look like each other? Well, look no further than this evidence: Really, Prince Louis is a mini Princess Charlotte in this super sweet side-by-side photo of the young royals.

This year was huge for the whole royal family, but for Prince William and his wife, Kate Middleton, it was definitely one for the history books. This year, the couple welcomed their third child into the world on April 23, according to Vogue, and the world has been smitten ever since.

So, it makes sense that the Cambridges were all smiles in their annual Christmas card this year. In the photo, Prince William and Middleton are dressed casually, surrounded by their children. Meanwhile, Prince George and Princess Charlotte hang on their parents with the biggest smiles on their faces.

But Prince Louis' expression is quite possible the best. In the photo, the littlest prince can be seen smiling with his eyes — or smizing, thanks to Tyra Banks — looking so pleased with himself.

But, as it turns out, this expression is quite common with his siblings, because Princess Charlotte once donned the same exact expression in another Christmas card, according to People.

After Princess Charlotte was born on May 2, 2015, the royal family spent their first Christmas as a family of four later that year, which means the family got to take their first official Christmas card together with the 7-month-old, according to Good Housekeeping.

In the photo, Princess Charlotte is held by Middleton (just like Prince Louis), and wearing that same content smile and furrowed brow on her face, just like Prince Louis did three years later. Although the siblings might be three years apart, it's as if no time has passed when you compare the two photos of them together. They really are almost spitting images of each other.

These royal siblings are known for sharing; Princess Charlotte has been photographed wearing her older brother's hand-me-down sweater twice now, according to Brides. So, it makes sense that they would share facial expressions, too. Their noses, eyebrows, and content smiles on their faces are basically identical to each other.

Although both of these Christmas cards are beyond precious, the first Christmas card with Princess Charlotte was heavily criticized at the time for "bad Photoshop," according to BuzzFeed. Some people speculated on Twitter that they felt like Princess Charlotte had been "photoshopped in" to the photo, however, a representative for the family told BuzzFeed that they had "no comment" at the time.

But no one is speculating about the royal family's Christmas card this year. It's just too sweet.

This definitely won't be the last time the siblings get compared, because if one thing is for certain: the royal kids share that strong cuteness gene.