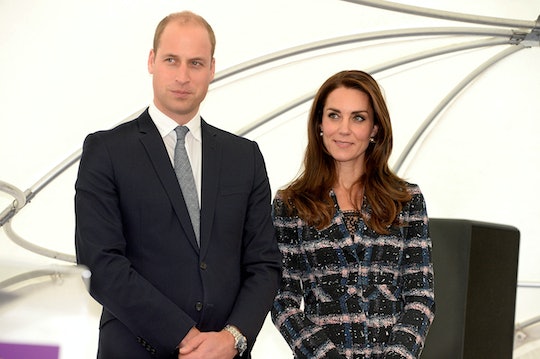 On Sept. 4, it was learned that Price William & Kate Middleton are expecting their third child via a press release shared by Kensington Palace. According to the press release, the couple is "pleased" to announce the news and the Queen and both families are "delighted" that the Duke and Duchess of Cambridge have another baby on the way.

“The Queen and members of both families are delighted with the news.”

Can't you just feel the excitement within every word? OK, maybe the statement is a little elevated compared to some celebrity Instagram reveals, but this is royalty we're talking about. They have to keep it classy.

Along with the news, the statement also revealed that Kate is suffering from "Hypermesis Gravidarum," which she dealt with in her previous two pregnancies with Prince George and Princess Charlotte.

“As with her previous two pregnancies, The Duchess is suffering from Hyperemesis Gravidarum. Her Royal Highness will no longer carry out her planned engagement at the Hornsey Road Children’s Centre in London today. The Duchess is being cared for at Kensington Palace.”

According to BabyCenter, Hyperemesis Gravidarum is the "severe nausea and vomiting during pregnancy that affects up to 3 percent of expectant moms." It can cause expecting mothers to not retain food and fluid, causing things like dehydration, weight loss, and "other complications," Baby Center notes. It is considered an extreme form of morning sickness.

During her two previous pregnancies, Kate dealt with the same condition that called her out of quite a few functions. In some cases, the "acute morning sickness" has left her hospitalized. Per the statement released, it appears Kate is being cared for at Kensington Palace.

The mother of two has a lot on her plate these days. Not only does it seem as though she is planning on returning to her duties as Duchess of Cambridge following today's momentary, but she will soon be sending off Prince George, who is four now, to "primary school" at Thomas’s Battersea.

As with her previous two pregnancies, there's no doubt that Kate will be a pillar of strength throughout this pregnancy. Congratulations to the "delighted" couple and their family.