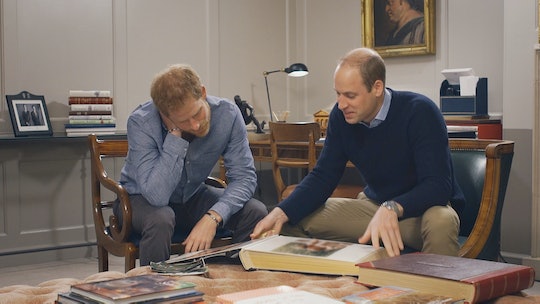 Prince William & Prince Harry Open Up About Their Mother In 'Diana, Our Mother'

The twentieth anniversary of Princess Diana's death is approaching on August 31, but before that HBO is set to air a documentary on July 24 that honors her life and focuses on her children, Princes William and Harry. Diana's life and death have been the subject of much focus over the decades, but Diana, Our Mother: Her Life and Legacy might be one of the few projects participated in by her sons. Both men have spoken about her before, however, and these Prince William and Prince Harry quotes about Princess Diana show how much she meant to them – and how keenly her loss is still felt.

At the time of Diana's death in 1997, Prince William was only fifteen and Prince Harry only twelve; the loss of their mother combined with the intense media scrutiny that followed must have been especially traumatic at such young ages. Their privacy should be respected, but in HBO's new documentary they were able to control the narrative themselves. Diana, Our Mother reportedly focuses on the positive aspects of her life while her children reminisce about their time with her.

They describe her as fun and loving, with Prince Harry recounting that they would have some very normal childhood adventures, including "taking us for a burger every now and then or sneaking us into the cinema, or driving through the country lanes with the roof down on her old-school BMW listening to Enya." But in addition to the fond memories, they've discussed their grief and their desire to do right by their late mother.

The 10th Anniversary Of Her Death

A decade after Diana's passing, Prince Harry spoke about her in a speech that reflected on his grief and honored her life. "William and I can separate life into two parts," he said. "There are the years that we were blessed beside us with the physical presence of both our mother and father. And then there are the ten years since our mother's death."

He went on to say, "She was our guardian, friend, and protector. She never once allowed her unfaltering love for us to go unspoken or undemonstrated. Behind the media glare, to us, two children, she was quite simply the best mother in the world."

Prince William has spoken a few times about how the pain of his mother's loss still felt fresh despite the passage of time, even commenting on how unexpectedly the grief can reappear. In a speech supporting the Child Bereavement Charity's Mother's Day campaign in 2009, he said, "Never being able to say the word 'mummy' again in your life sounds like a small thing. However, for many, including me, it's now really just a word – hollow and evoking only memories. I can therefore wholeheartedly relate to the Mother’s Day campaign, as I too have felt and still feel the emptiness on such a day as Mother’s Day."

Being Open About It

At an event at Kensington Palace for the mental-health initiative Heads Together, Prince Harry said, "Everything can be okay, but I really regret not ever talking about it for the first twenty-eight years of my life. I never talked about it." It seems as time passes, he is becoming more comfortable speaking about his mother.

Aside from speeches, William has honored Princess Diana in more personal ways as well, such as proposing to his wife Princess Kate with his mother's engagement ring. "Obviously, she's not going to be around to share in all the fun and excitement, so this is my way of keeping her close to it all," he said in an interview with ITV News.

While talking to People, Prince Harry explained how important it was to him to make his mother Diana proud. "When she died, there was a gaping hole, not just for us but also for a huge amount of people across the world. If I can try and fill a very small part of that, the job done," he said. "I will have to, in a good way, spend the rest of my life trying to fill that void as much as possible. And so will William."

It's clear that Princess Diana had a profound impact not just on the world, but on her sons.